This is a cross-post from anonymous mugwump

This extract comes from towards the end of mugwump’s post. Do read it in full here.

3.1 The Russo-Chinese Devil You Don’t Know: The Alternative

It should be clear that from the sections above that without our assistance, these authoritarian regimes would still exist and they would be significantly more repressive and illiberal. But the argument can go further: the alternative isn’t likely just a withdrawal of benefits but the entrance of what political scientists call ‘Black Knights’ (other authoritarian countries that assist them) with significant negative effects.

I know I’m probably boring you but I want to be clear and consistent: these Black Knights are not a cause of regime persistence. Regime persistence is, again, rooted in domestic factors – but in the same way the West can create positive impacts, Black Knights can create negative impacts. The above study from Bermeo has already shown that aid from authoritarian countries leads to less likelihood of democratisation. But there is some literature to suggest it isn’t as bad: Bader (2015) looks at the effect of aid from China on regime persistence. The first point is:

As regimes differ in their domestic strategies of political survival, they vary in their ability to translate this type of assistance from China into their specific survival strategy.. party-based regimes are more vulnerable to domestic mass protest than other regimes: as party-based regimes often claim to serve the broader interest..

…the type of external assistance that China provides is more useful to some types of regimes than others. More specifically, existing literature would suggest that party-based regimes have higher incentives to engage in performance-based legitimation strategies and are more able to translate China’s economic engagement into power preserving societal support than other types of regimes

Given that Chinese assistance is usually strongly tied, personal regimes, for example, which are strongly reliant on clientelist networks, may find it difficult to channel Chinese assistance selectively to their particular support group defined by familial, ethnical or clan ties. 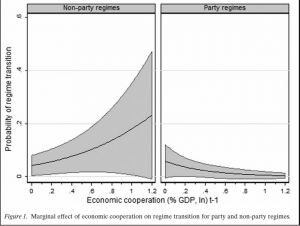 Figure 1 illustrates the effect of Chinese Economic cooperation for model 2 by plotting how the probability of collapse (Y-axis) changes with increasing amounts of Economic cooperation (X-axis) for party and non-party regimes. For non-party regimes (left graph), the slope of the function is increasing, while it is slightly decreasing for party-based regimes (right graph). 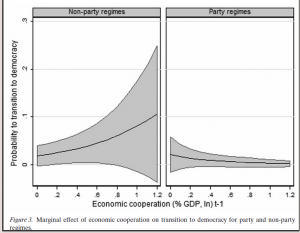 So maybe it’s not certain for all regime types that Black Knights will disrupt democratisation. The argument I would put forward is that where the West is not operating, and Black Knights are, you don’t have the benefits described above. But I’m not inclined to accept there isn’t a negative effect (contra Bader). Elsewhere, Bader (2013) finds that a ‘1% increase in export dependence on China lowers a leader’s hazard rate of losing power by 5% (1 − exp(−0.06)).’ Or take Russia’s behaviour: Babayan (2015) outlines a comprehensive review of Russia’s actions in its area:

…through economic sanctions, military threats, and even through such formal institutions as the Eurasian Union, Russia has contributed to the stagnation of democratization in its near abroad. It counteracted democracy promotion or, for that matter, any other Western policies, which it considered a threat to its geostrategic interests and ambitions for restoring its great power status.

As Levitsky and Way state:

[Western] leverage may be reduced by the existence of what Hufbauer et al. call “black knights,” or counter-hegemonic powers whose economic, military, and/or diplomatic support helps blunt the impact of U.S. or EU democratizing pressure. Russia, China, Japan, and France played this role at various times during the post–Cold War period, using economic, diplomatic, and other assistance to shore up authoritarian governments in neighboring (or, in the case of France, former colonial) states. Examples include Russia’s support for autocrats in Belarus and France’s support for autocrats in former colonies such as Cameroon and Gabon (p.41)

Better is Vanderhill’s book Promoting Authoritarianism Abroad (2013) gives detailed qualitative analysis of how authoritarians can act as Black Knights. Her approach, fortunately, acknowledges local forces and shows international effects are not determinative. Rather, as per Western influence, can change incentives to behave in certain ways.

There is a lot of fairly persuasive literature which argues that Black Knights have a neutral effect. The latest issue of the journal Democratization is a special issue filled with essays about the effects of Black Knights. Here is an extract from the introductory essay:

Western democracy promoters are likely to empower liberal groups in the target countries, while countervailing efforts by non-democratic regional powers will empower illiberal groups. The differential empowerment of domestic forces depends in turn on the leverage of the EU and the US powers as compared to that of illiberal regional powers in terms of credibility of commitment, legitimacy, and resources… the decisive struggle is being fought in the target country between pro-democratic and anti-democratic forces – and external actors cannot do much more than try to affect this domestic balance of power.

Way (2015) (the same Way of Levitsky and Way) recently published ‘The Limits of Autocracy Promotion’ in the European Journal of Political Research in which he concludes:

Russia has played a role in promoting secessionist conflicts in Georgia, Moldova and Ukraine. At the same time, a closer examination of Russian foreign policy and its impacts raises doubts about just how much the failure of democracy in the region can b blamed on Putin or previous Russian governments

Way makes a few good points that are worth repeating. Black Knights do not promote authoritarianism in the way that the West attempts to promote democracy. It is not an ideological end, rather, Black Knights pursue their own interests which may not necessarily tack with regime type. I take this all as supporting the idea that democratisation is primarily a domestic issue: ‘much of the pressure and assistance has been directed at countries that already have quite weak democratic pre-requisites.’

There is an interesting point that Russian activity may empower democratisation because it riles the population up (see Borzel (2015)). Nonetheless, counter-factuals in which Black Knights swoop in are vital: these authoritarians will simply get their arms from someone else, they will get their aid from someone else and they will continue to survive.

We have already seen that the West constrains its allies. And before you all give me examples of Western allies committing human rights abuses, you’re missing the point: think of the alternative. I have provided evidence of a constraining effect. It might not be good enough to stop all abuses, but its better than not having that effect. I’m open to accepting that the role of Russia and China is similarly neutral (primarily because its a domestic issue).  To repeat: my primary argument is that Black Knights are bad because they don’t bring the benefits the West does. My secondary argument is that Black Knights lead to negative outcomes (which is not as well supported).