I was once invited to speak at a conference about Islamophobia, organised by a Muslim organisation that has worked with both Labour and Conservative MPs. In the end, I couldn’t actually make it. But a blog appeared on a left-bashing website suggesting that I was going to share a platform with a gay-hater. Now, I’d never heard of this individual until this blog appeared. They were, apparently, due to speak later in the day at this conference. I came under attack, nonetheless, and it’s still occasionally dredged up even now.

He’s talking about us.

Anyhow, on to the meat of Owen’s argument:

Now I must have met all sorts of people at these conferences, talked to them – without knowing anything about them.

I could of course insist on a detailed list of every single person invited to all protests, meetings and conferences, and then do detailed background checks on all of them. I probably don’t need to explain how ridiculously impractical this would be.

And here is the problem facing Jeremy Corbyn. If he knew somebody had anti-Semitic views or indulged Holocaust denial, he would find their views utterly repulsive. But having spent his life attending more meetings and protests than virtually any other MP, he will have encountered and met countless people. I can’t remember people I’ve shared platforms with and met (which has led to many embarrassing moments in my case) and the idea an MP like Corbyn juggling his constituency and campaigning work and meeting the number of people he does will remember is pushing human capabilities to an extreme degree.

The trouble here is that Corbyn doesn’t just meet or appear on platforms with such people. In case after case, he has been shown to host them, promote them, and defend them from the – correct – accusation that they are hateful racists and open supporters of genocidal politics.

In any case, Corbyn has a somewhat different explanation for palling around with “dodgy people”. In his (partial) answer to (some of) The JC’s questions, he say:

Jeremy has met many people with whom he profoundly disagrees, in order to try to promote a peace process. He has supported and continues to support peace and reconciliation processes in South Africa, Latin and Central America, Ireland and of course in the Middle East. He believes it is necessary to speak to people with whom there is disagreement – merely talking to people who already agree won’t bring about a settlement.

And that is fine, were Jeremy Corbyn actually engaging, and in a position to engage effectively in, what he terms “diplomacy”. However, he doesn’t. He hosts, promotes and defends only those “dodgy people” with whom he is politically in a position of – to use the far Left euphemism – “solidarity”.

But let’s take that statement at face value. Sometimes you have to meet with people with whom you profoundly disagree, for the sake of promoting peace.

A number of years ago, Quilliam met with the EDL leader Tommy Robinson. They persuaded him to engage in dialogue with various Muslim figures, and most importantly, convinced him to end his association with the EDL. Although Robinson has continued to say nasty and objectionable things, his departure from the EDL was essentially the death knell of the organisation.

What this has meant is that the frightening and disorderly EDL demonstrations outside mosques have now come to an end.

What was Owen Jones’ reaction to that rather impressive achievement?

Independent columnist Owen Jones says Robinson has made a cynical decision to abandon his organisation just as it was about to go down.

“The problem is that some liberals have been very gullible,” says Jones. “My fear is that Quilliam is facilitating the mainstreaming of his bigotry. He hasn’t renounced his views.”

Except Jeremy Corbyn has nothing to show for his “engagement”. The hateful and racist chants and the banners of genocidal terrorist organisations are still very much in evidence at the rallies he attends. 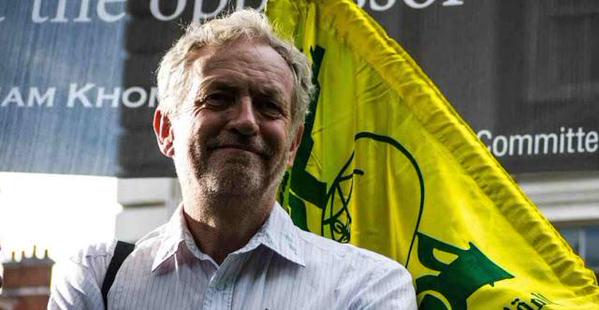 There is a real problem that comes out of this which must be addressed. The vast majority of people in the Palestine solidarity movement are motivated by justice. But a minority are anti-Semites, and they need to be tackled and driven out of the movement. The failure to do so will mean that people like me – who support the Palestinian cause out of a sense of justice – will risk meeting or sharing platforms with people who indulge or possess anti-Semitic views.

Good for Owen Jones for recognising this problem. However he’ll never admit that Jeremy Corbyn has no intention of opposing the antisemites who populate his support base, turn up at the meetings he organises, join him on platforms, or are “friends” who he praises in lavish terms. How could he? Can you imagine Jeremy Corbyn at next year’s Al Quds Day speaking out against antisemitism in Hezbollah?

The sad truth is that today’s statement to the Jewish Chronicle is the first time I’ve heard Corbyn oppose antisemitism, as opposed to defending antisemites.

It took weeks of articles in the Daily Mail, Telegraph and articles and interviews by concerned Labour MPs for him even to deign to respond to this issue.

William Shawcross is being Cancelled: As a Muslim I will not sign the letter boycotting the review of Prevent