Here’s a fresh lie from the Corbyn camp:

Jeremy’s very strongly-held view is there should not be any anti-Semitic, Islamophobic or racist slogans or banners at any demonstration, ever.

Er, here he is at the Khomeinist hatred festival known as Al Quds Day in London in 2012. A Hezbollah banner is the backdrop for his idiot grin. 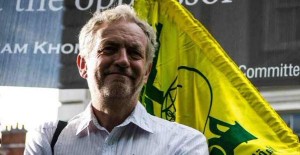 You can see his Quds Day speech here. He opens with a “thank you friends” salute to the “we are all Hezbollah” crowd.

Here are some of his “friends” at Al Quds Day: 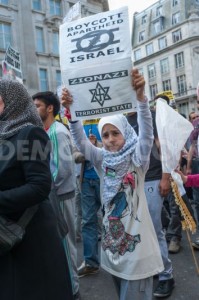 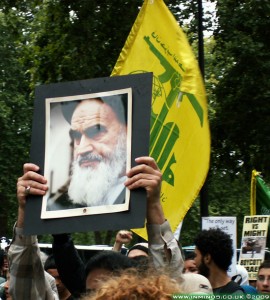 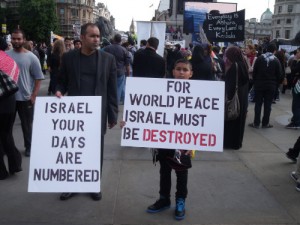 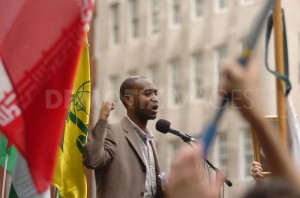 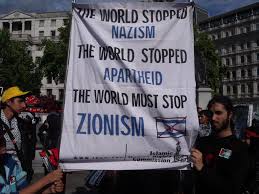 There’s another crap lie in the HuffPo article:

Jeremy has involved himself in Middle East issues for many years, meeting many people and groups with whom he has huge differences of opinion – but he believes that only dialogue can bring about peace.

What “huge difference of opinion”? Note what he says – see for yourself – in the now notorious “our friends Hamas and Hezbollah” video.

The idea that an organisation that is dedicated towards the good of the Palestinian people, and bringing about long term peace and social justice and political justice in the whole region, should be labelled as a terrorist organisation by the British government, is really a big, big historical mistake.

Nor should he be allowed to get away with his wise statesman rubbish act, for it too is a lie. Surely a statesman for peace would have time for Tzipi Livni? Perhaps even “tea on the terrace” at Parliament, his fond wish for the hate preacher Raed Salah?

No, not at all. Corbyn was at the forefront of calls for her to be arrested for “war crimes” should she visit Britain. See one example here.