The horrors of Islamic State (IS) have roots. Chief among them are the most viciously intolerant strands of Saudi Arabian Islam.

The UK has not been spared, oh no. Consider London preacher Khalid Khan. His website offers Islamic guidance that would be most welcome in Raqqa, the IS stronghold in Syria. Try this one from a Saudi tome:

The Companions of the Prophet have not differed in killing sodomites, and some of them are of the opinion that a sodomite is to be raised to the top of the highest building in town and thrown from there, followed by stones thrown at him.

There are many more hideous rulings in that document. Apostates and married adulterers too must be killed, like homosexuals. Those who disrupt Muslim “unity” may be killed too. Thieves will lose hands. Even wine drinkers must be lashed eighty times.

Drug users are in trouble too, for drugs “are propagated in our lands by the Jews and their agents so as to destroy Muslims”.

You really don’t want to have any connection at all with Jews in this Islam. Elsewhere on his site, Khan has posted End Times talk that is also important in IS circles. It includes that sickening fantasy:

There will be no place for them to hide; they will not be able to hide behind any stone, wall, animal or tree – except the boxthorn (al-Gharqarah) -without saying, ‘O Muslim servant of Allâh! here is a Jew, come and kill him!

Another guidance document covers blessed jihad. It is exultant, calling jihad “the highest level in religion and one of the best acts of worship to the extent that some scholars consider jihad the sixth pillar of Islam”.

Mind the etiquette, though. Don’t kill innocents but go ahead, do enslave them, including women and children:

When captured, those people become slaves to Muslims; the Prophet used to have such people as slaves when he captured them.

“Dhimmis” who survive jihad need to be “humbled” and pay the jizya tax for good measure.

Indeed, the death cult is not enough. Life too must be miserable, according to Khan’s counsels. A woman’s face must be covered, and her husband can order her to do so, in the name of Allah. Music? No way. It “destroys the heart and distracts people from the truth; it generates hypocrisy in the heart and is not permissible.” People who do not follow the right Islam? They are poison, never mix with them.

So, are people rushing to distance themselves from Khalid Khan as David Cameron “gets tough”? Not a bit of it. Mr Khan will be welcomed at the East London Mosque this Saturday. The mosque’s imam Abdul Qayum will speak alongside him. 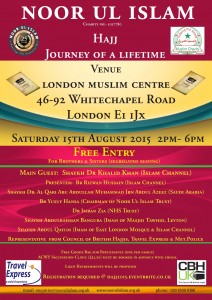