Especially if you’re a Democrat.

The first major poll of Republican voters after Thursday’s debate– which, we were assured, would once and for all, truly and surely, spell doom for Donald Trump’s candidacy: 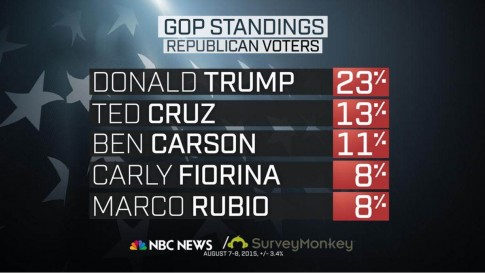 In other routine Republican craziness:

Carly Fiorina, whom the debate seems to have done some good poll-wise, says she would never replace a retiring federal worker, no matter what the job, no way, no how.

Scott Walker says abortion to save a woman’s life is a “false choice” and “there is always a better option out there”– which, according to the American College of Obstetricians and Gynecologists, is not true.

John Kasich, who spoke sensibly about Medicaid expansion at the debate, blows it by calling human-caused climate change “a theory that’s not yet proven.”

Update: I missed this. At the debate, Ted Cruz called on America’s president to act more like Egypt’s dictator.

And no, the Obama administration doesn’t get a pass on this either.