Because there are 17 Republicans seeking their party’s presidential nomination, Fox News decided to split them into two debates.

I recently joined the cable TV cancellation trend, so I can’t watch live.

The first debate, snarkily known as the “Kids Table Debate,” featured the seven candidates with the lowest poll numbers, as determined by Fox. According to Twitter buzz, Carly Fiorina was the most impressive.

The “real” debate, featuring the top 10 candidates, starts at 9 p.m. Eastern Time. If you’ll be watching, feel free to comment.

Update: In other “news” from the junior debate: Rick Perry’s campaign denies he said “Ronald Raven,” even though he did.

Yep, it’s going to be that kind of campaign. 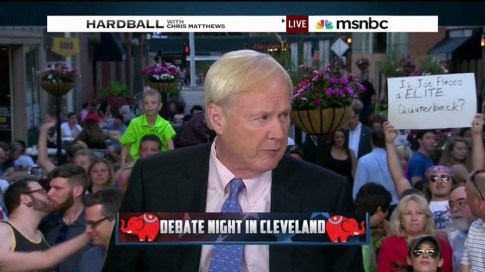 Joe Flacco is the quarterback for the Baltimore Ravens football team. Which brings us back to Rick Perry (see above).

Another update: Good for Ohio Gov. John Kasich for defending Medicaid expansion— a very un-Republican thing to do these days.

Morning update: Donald Trump stayed up all night sending angry tweets about the way he was disrespected by Megyn Kelly, Frank Luntz and others at Fox News. What a guy.

As for Ohio Gov. John Kasich– I realize he was facing a hometown crowd, but it was fascinating to watch what I presume was an overwhelmingly Republican audience cheer his defense of Medicaid expansion under (shudder) Obamacare.

A refreshing contrast, at least, from the cheers for “Let him die” at a 2011 GOP debate.