During the campaign, Charles endured vicious online personal attacks from SNP supporters and officials, some of which has already been reported. However, a review of Twitter messages indicates a deeper involvement by the SNP MP.

Ian Blackford chose to campaign against Charles’ voting record at Westminster and endorsed and used the hashtag #WhereIsCharlie.

Among Blackford’s supporters, #WhereIsCharlie gained momentum and was widely used to taunt and mock Charles directly:

#WhereIsCharlie became well known as a pejorative term and this potential voter advised Blackford that her support was conditional on a “clean” campaign. Although Blackford did not originate #WhereIsCharlie the voter was mislead into thinking that Blackford was innocent of its use.

Charles’ recent voting record may have been a valid criticism, but there were mitigating circumstances. His father passed away in April 2015. His mother, Mary, had died in 2013 and in 2014 – close to the anniversary of their mother’s death – his older brother, Ian, was paralysed after a fall in his kitchen, leaving him in need of 24-hour care. Any person, even a politician, could be excused for time off work in light of these personal tragedies. By any standard, Charles’ served his constituents and country very well in his 32 years of devoted and unblemished service.

Charles’ struggle with alcohol is well-publicised. But it seems making fun of personal suffering is fair game to SNP supporters, and even to prospective MPs, for there followed a concerted and cruel attack using Charles’ alcohol problem:

And on it went right through the election campaign which was later stepped up and orchestrated by the allegedly disgraced Brian Smith (Twitter name @lobsterferret), convener of the SNP Skye and Lochalsh branch:

Brian Smith is clearly an associate of Blackford as these tweets reveal. This association has also been reported by former Labour MP Brian Wilson:

As we can see Blackford (@IBlackfordSkye or @IBlackfordSNPMP) is regularly included in the abusive tweets and there is no evidence that he tried to quell these attacks.

As an aside, it is worth noting that serial abuser above Claire Robertson (@clairerobsc1) was receiving encouragement from one of Charles Kennedy’s constituents and now SNP MP for Caithness, Sutherland and Easter Ross, Paul Monaghan (@_paulmonaghan).

Monaghan tweeted to Robertson “We all have different roles in this, you fulfill yours spectacularly well. I mean it. Keep it up.” And “I enjoy all your posts and your sense of humour. Keep it up”.

Monaghan seemed confused as to whether he sent encouraging tweets or not. When asked about the tweet by the Caithness Courier, he said he could not recall sending it and added: “Even if I did, it was taken out of context.” He did remember where to find the Tweet, however, and delete it before speaking to the reporter; just as he remembered to delete other Tweets which suggested a long-standing correspondence, and neglected to mention them. 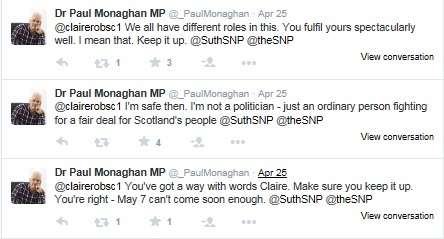 Interestingly, Monaghan was also interacting with Brian Smith (@lobsterferret) around this time:

And Monaghan himself also joined in using the #WhereIsCharlie theme:

It is clear that the pernicious online abuse had made its mark on Charles:

The abuse was not just limited to social media but spilled over into physical intimidation (not unknown in SNP campaigns) involving Charles’ office staff, reported on Twitter by Caron Lindsey, Editor of Liberal Democrat Voice:

“The SNP candidate for the area, Ian Blackford, stormed in this morning with 4 supporters and shouted at everyone, wagging his finger at a member of staff….. He threatened “retaliation,” of an unspecified nature if they did not apologise and retract something entirely verifiable that they’d said on Facebook.”

This was apparently triggered by LibDem posters describing Blackford as a “Banker from Edinburgh”, which is not incorrect and no fair-minded person could ever take this as a slur, especially from Charles Kennedy – this was not his style.

However, the overly sensitive SNP were angered by the perceived sleight that Blackford was not a Skye man but an “outsider”. Thus the hate campaign against Charles increased considerably after this point.

So, the SNP ran a “vigorous” campaign and took the seat. It is not known whether social media greatly affected Charles to the extent that it contributed to his defeat. It may have been the “time for a change” effect that lost the seat for this fine politician and kind man. But Charles did not deserve the abuse he received online especially concerning his fight with alcohol. It is unacceptable in decent society and it is shameful that there is no evidence that the prospective SNP MP made any attempt to stop it.

Ian Blackford will definitely be a change in style over Charles Kennedy. He certainly has the commercial nous that Charles never had – it is estimated that Blackford continues to earn around £103,000 p.a. in addition to his MP’s salary through directorships and the family business. With a number of outside interests, it remains to be seen if Blackford will “spend more time in constituency” as he promised in the election campaign.

And, like a number of new SNP MP’s Blackford has been quick to recruit family members to support their MP’s activities. Blackford employs his step-son John O’Leary as a “caseworker”.

We used to say “be humble in victory, gracious in defeat”. But in the case of the SNP, “be spiteful in victory, spiteful in defeat” is more apt as evidenced by this SNP supporter who laughingly claimed credit for a “very positive” campaign: