A year ago today hundreds of Western bodies tumbled out of the sky in the middle of a European war zone.

Nobody predicted the shooting down of Malaysian Airlines flight MH17 but with hindsight they could have. The war in Eastern Ukraine was at a turning point. Despite a corrupt and crumbling army and 92 thrown together groups of ragtag militia, the Ukrainians were turning the tide on the rebels.

But if it was not obvious that the exact same ‘little green men’ scenario played out in Crimea was being played out in the Donbas it should have by the time that the first planes started getting shot down. The fighter jets started going down and then the high flying transport planes.

Those transport planes were being shot down by some very sophisticated weapons, ones that took a lot of coordination and a lot of training to operate. They did not, to turn around Putin’s joking phrase, from when he was still pretending that those in Crimea were ‘local volunteers’, ‘come from a shop’.

We now know thanks in large part to the work of one British man, Eliot Higgins, almost beyond all reasonable doubt, that MH17 was shot down by a Russian missile system. This means a Russian crew, precisely because of the training required to operate such a system and Higgins just said that his Bellingcat team now have Russian names and have provided them to the official investigators, the Dutch Safety Board, where he is an official witness.

How could they know Russian names? Because those Russians posted the evidence themselves, on social media. After the jump watch the film by Vice News’ Simon Ostrovsky where he follows up on evidence gathered by Higgins of one Russian soldier’s presence on the Donbas battle fields. Ostrovsky finds the exact same spots where one soldier took his selfies. That soldier was from Buryatia, a Russian region whose people are Mongols. Hence the soldier got noticed in Eastern Ukraine.

After MH17 the tide turned back and the rebels with their Russian ‘volunteer professional assistants’ ensured that the war did not end last August but carried on, as it still does today, Minsk ‘peace’ or no ‘peace’. 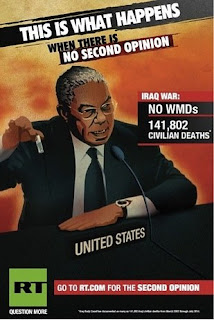 Russia has come up with five, to date, explanations for MH17, none blaming themselves of course and some out of science fiction. One by the Defence Ministry is described by Bellingcat as Russia’s “Colin Powell moment”.

That moment when the former American Secretary of State went before the UN Security Council to argue for war on Iraq has become a poster for Russia’s lavishly funded international propaganda TV network RT. You may have seen it on the Washington Metro or on London’s Tube. But just as the West tolerates RT so does Western media have ‘balance’ and thus MH17 will remain ‘he said, she said’ until the official report comes out in three months time.

That ‘balance’ and essential fairness which underpins our Western societies is used against us by Russia. Their security services and their ‘political technocrats’ know full well that with something like MH17 they can muddy the waters enough that many in the West won’t blame Russia. They can somehow wriggle out of this.

The FSB and the Kremlin will find willing partners on both the left and the right but they will also find unwitting ones like journalists. Journalists such as one Mike Kelly writing today for the Newcastle Chronicle. (Newcastle is where two of the British victims hail from.) Kelly presents MH17 as a tale of ‘versions’ and he condemns the ‘squabbling’ over whodunnit, comparing this notion of his with the ‘quiet dignity’ of today’s memorials.

Putin could not have said it better – in fact he has said it with his talk of the politicisation of the MH17 inquiry. But just as climate change is not about ‘sides’ of equal veracity neither is MH17, to say otherwise is to damn the whole profession of investigative journalism and to sign up to the Russian propaganda meme of there being no such thing as the truth! And it is no service to the victims’ loved ones to pretend otherwise.

Tomorrow Ukraine will disappear from people’s radar but come October we know what the Dutch report will say. Not because we are arrogant but because others have done the hard work.

Even when we then have a Russian war crime spelt out in black and white I predict we will still hear the siren voice of appeasement, from the left and from the right. Business will still go on and London palaces will still be bought with corrupt money.

Watch Simon Ostrovsky’s astonishing report tracking down one Buryat soldier to one of Russia’s remotest regions.