This is a cross-post from Futile Democracy

A great test of consistency for those of us who believe in the fundamental right to express offensive ideas was presented this week, when a man wandered Parliament Square in the centre of London wrapped in an Islamic State flag. Liberals became conflicted; should he be arrested for that or not? It isn’t just Islam that is in the midst of soul searching due to the rise of Islamism, liberals across the World are struggling with what it is they stand for also. A further test of that is happening today;

As with rights that cause inner conflict when applied to those we disagree with, today social media has been full of the irony of ‘small government’ advocates demanding the curbing of the right to strike, following the strike by London Tube workers. In essence, utilising ‘small government’ to ban human beings at the worker level from organising for grievances. State restriction for free expression highlights the insecure nature of the ideology that is protected from criticism and inquiry – it cannot stand on its own merits – similarly state restriction for free association suggests that those with economic power are vastly insecure with the system that enables that power, and resort to using the law to prevent dissent. To give a wonderful example of this; when the government pledged to legislate on restricting unions by introducing a 40% threshold for strike action, they also coincidentally happened to cut pay for NHS staff that very same day. Twitter today is full of those intensely illiberal men in suits (unsurprisingly), hell bent on further utilising the ‘small government’ they advocate, to restrict rights, highlighting that whilst the narrative of capitalism is freedom, dig a little deeper and you find oppression is its key. Take this guy, for example: 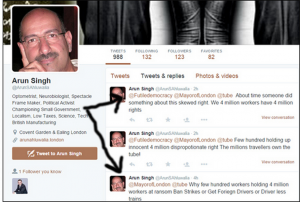 – Contrary to the language on his profile, this represents a call for a massive government. Striking has lead to huge developments both socially and economically over the past two centuries, for which this guy benefits every day. He now seeks to ban any more, ever, through the power of government. His playing field is to be tipped entirely in the favour of those with power; Empower bosses, whilst institutionally coercing workers. And he’s not the only one: 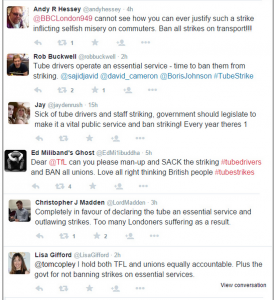 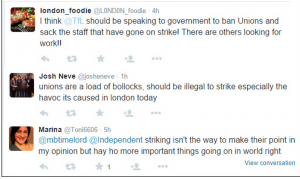 If anything highlights the vital importance of the right to association, the right to collective bargaining, and the right to strike, it is the outburst by those with power and wealth who would seek to restrict that right. You are perfectly entitled to disagree with the reasons behind the strike, but to call for the rescinding of basic democratic rights in an economic system that in which the balance is so wildly tipped in favour of capital over labour anyway, is to protect that imbalance by force. It is to further empower the powerful. It is the opposite of advocating “small government”. It is vastly illiberal.