Excuse the lack of enthusiasm for the 13th Republican to enter the race for the 2016 nomination, but I’m afraid I blew out all my excitement on Donald Trump (who ran second in a recent poll of New Hampshire Republicans– just sayin’).

Louisiana Gov. Bobby Jindal’s gimmick was to record a series of barely-audible videos of himself discussing his decision to enter the race with his kids.

Jindal, an Indian-American, was once considered a rising star in the Republican party, but I suspect his moment has passed.

He had some intelligent and perceptive things to say about the Republican party after Obama’s 2012 reelection. He said it was time for the Republicans to “stop being the stupid party,” but he continued to approve state-funded vouchers for students to attend schools that teach creationism exclusively.

Jindal, now in his second term as governor, has had to deal with a budget crisis largely of his own making. And The Washington Post reports:

Jindal is now so unpopular in deep-red Louisiana that his approval rating plunged to 32 percent in a recent poll — compared with 42 percent for President Obama, who lost the state by 17 percentage points in 2012. 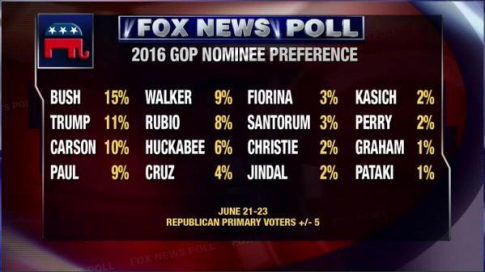