Dyllan Roof has been arrested after shooting nine people at the historic Emanuel African Methodist Episcopal church in Charleston, South Carolina.  According to Roof’s roommate he had been planning something like this for months.

Tensions and divisions quickly became apparent as people began to respond to the breaking news.

Attempts to define the crime prompted some heated debate, with many expressing impatience or anger if anyone hesitated to describe the murders as an act of terrorism.  Maajid Nawaz was targeted for some nasty (and completely unearned) abuse when he engaged with this issue:

Identifying terrorism is difficult as there is no single agreed definition. Of the three definitions I link to early in this 2013 post, the Charleston shootings align well with the first, rather less well with the second.

However, although perhaps the killer didn’t have as specific a political goal as Breivik or the IRA, he did surely have a political (ideological) motive.  Here Brian Phillips makes the case for classing Charleston as terrorism.

Some initial responses were just bizarre.  This, from a CNN anchorman, seems a clear case of Cidu’s razor in action: 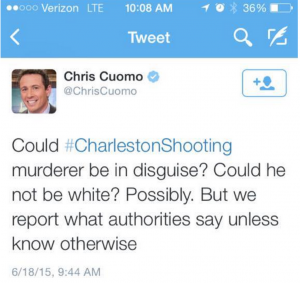 (Edit: At the prompting of Julia in the comments I’ve looked back at this and think his explanation – that he was in fact responding sceptically to speculation – seems reasonable. I was going to delete this bit, but others may already have seen this tweet out of context so it seems useful to set the record (apparently) straight.

Some, inexplicably, continued to doubt that the apprehended suspect was white, even when they’d seen his photograph: 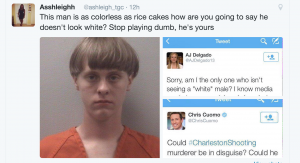 Fox News, and others, attracted criticism for trying to make this about faith rather than race.

It’s not surprising that this proved a particularly popular tweet:

(This is the mirror image of the way in which some people – different ones generally from those slow on the uptake over the Charleston shootings – refuse to acknowledge religion as a motive for murder, even when terrorists quite explicitly identify it as what drives them.)

Others focused on apparent double standards in responses to different types of terrorism. Senator Lindsey Graham wanted the Boston bomber treated as an enemy combatant, but seemed to think the Charleston shootings happened in an ideological vacuum.

I just think he was one of these whacked out kids. I don’t think it’s anything broader than that,” Graham said. “It’s about a young man who is obviously twisted.”

Finally here’s a profile of the murder victims. Clementa Pinckney, senator and pastor, had been a proponent of stricter gun-control legislation. It has been reported that Roof’s father recently bought him a gun, and in  his response to the shootings President Obama touched on the issue of the gun-control.

“At some point, we as a country will have to reckon with the fact that this type of mass violence does not happen in other advanced countries,” Obama said from the White House Briefing Room. “It doesn’t happen in other places with this kind of frequency. And it is in our power to do something about it.”

Nazi Terror Attack Against a Synagogue in Pennsylvania