This is s cross post by Charlie Winter at Quilliam 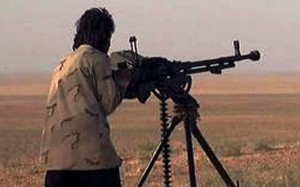 Islamic State one year on: Now, more than ever, Isil needs to appear active and dangerous – the perception of its ever-growing momentum is something the group is desperate to sustain

A year on since it it staked its black flag over a vast chunk of Iraq, Isil is busier than ever. The group has made impressive military gains recently, foremost in its capture of Ramadi, the capital of Iraq’s Anbar Province, and the seizure of the central Syrian city of Palmyra, both of which were taken within a week of each other.

At the time of writing, Islamic State of Iraq and the Levant is continuing to expand westwards towards Damascus in the south, while at the same time encroaching ever more on the northern city of Aleppo. Internationally, too, it has been rearing its ugly head, with multiple high-impact, high-profile suicide bombings hitting the Arabian Peninsula in the past fortnight.

The “Isil in decline” narrative that has pervaded the media in recent months has been systematically decimated by such events. For a while now, optimistic officials from anti-Isil coalition member states have waxed lyrical about the progress made against the group: key players, they say, have been killed, weapons stores obliterated and strategically critical territories lost.

This narrative is mistaken and, in all likelihood, it will only continue to look more so in the coming weeks, as Isil up-scales its videographed violence, continues current offensives, and carries out more terrorist attacks abroad.

Lest we forget, the Isil caliphate was declared on the first day of Ramadan last year. Now, with Ramadan just days away, we can be confident that the group will mark the occasion of its first anniversary. Even after its anniversary passes, its activity is not likely to abate – after all, as the group’s leader Abu Bakr al-Baghdadi noted last year, “there is no deed in this virtuous month” better than jihad.

The motivations for Isil expanding its global agitation operations and redoubling efforts in its regional offensives are simple to identify. Beyond theology, the automatic result of such activity – publicity and outrage – is instrumental to Isil’s very ability to survive. Now, more than ever, it needs to appear active, dangerous and triumphant – the perception of its ever-growing momentum is of existential value to the group and something that it is desperate to sustain.

Make no mistake, everything we are seeing now and will be witness to in the coming weeks, has been meticulously planned, probably months ago. The new offensives, pledges of allegiance, propaganda: all of these disparate strands of Isil’s growth and consolidation strategy will be drawn together in the short-term future, as its leadership works to magnify its global menace.

Besides the release of a barrage of Isil snuff films – which, safe to say, will be typically abhorrent and likely feature a mass execution in the ancient ruins of Palmyra – there will likely be tangible changes to the strategic playing field as Isil stretches itself further.

The world’s media must prepare itself for this and react accordingly, in a manner that does not play into the organisation’s hands. The media is obligated to report on its crimes, but it must do so in a manner that Isil supporters do not revel in. All too often, coverage of Isil has turned into an extension of the propaganda itself: using clips or screengrabs from Isil videos only serves to broaden the audience for its industry of fear and supplement the jihobbyist echo chamber that sustains its.

Instead of acting as a mode of transmission, global media should fulfil its potential and recognise that its role, easily as important as any military initiative, is most crucial in countering Isil. Who, after all, is better-placed to debunk Isil’s utopia myth by projecting the voice of those with first-hand experience of its lies, the people who have fled it?

The more ground taken, the more anger provoked and blood spilled, the stronger Isil looks. As long as it is perceived from the outside to be something undefeatable, it can make the claim that God is on its side and continue to draw in its most valuable commodities – fear and human capital.

Hence, in the coming weeks, it is more important than ever than its propagandists are stopped from steering the media discourse. The caliphate brand is strong, but it is not indestructible. Yes, Isil is not in decline – but nor is it invincible. Now is the time to exploit its already extant cracks.

If ever Isil actually looks in decline – that is, real decline – then the coalition’s job of degrading and destroying it would be eminently achievable. The more Isil struggles, the simpler it is to draw attention to the glaring falsehoods in its theological, political and military narrative and, hence, the lesser its ability to muster together new recruits.

Isil does not just crave attention, it needs it to survive.