This is a cross-post from Futile Democracy

Over the years of writing articles, of changing my views on certain subjects, softening on some, or hardening on others, the timeless responses to those articles tend always to be very angry because I’ve offended religious or political sensibilities, or supportive for the very same reason. Very rarely does anyone – whether angry or supportive – misrepresent what I’d written. It takes a special kind of dishonesty to do that, someone who cares little for truthful representation of the views and thoughts of others. Enter CJ Werleman: 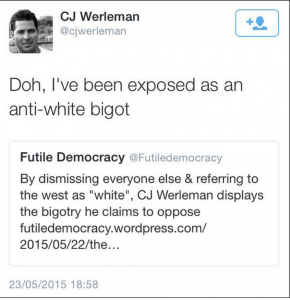 – It’s important to note from the start, that I’ve never accused, or implied that CJ Werleman is ‘anti-white‘. On the contrary, I think Werleman presents a wholly white privilege narrative. And so with this in mind, I thought I’d clarify – and in much of the article, simply repeat from my previous article – what I took exception to in Werleman’s article for Middle East Eye. Here are the two paragraphs in question:

“Moreover, New Atheists enthusiastically, and often unintentionally, promote western imperialism, and any individual who supports an erroneous narrative (“clash of civilisations” is the theme of New Atheism) that, by design, attempts to justify western intervention in the Middle East, Africa, or Asia is, ergo ipso facto, a white supremacist.

Case in point: Somali-born, anti-Muslim activist Ayaan Hirsi Ali is feted by the New Atheist movement. Her most staunch supporters include celebrity New Atheists Harris, Bill Maher and Richard Dawkins. Last weekend, Hirsi Ali was the keynote speaker at the largest annual gathering of atheists – the American Atheists convention, despite the fact both her fictitious biography and anti-Muslim bigotry are well documented.”

– It’s worth remembering that with such a provocatively absurd title like “Is New Atheism an anti-Muslim, white supremacy movement?”, the point of the article is not to present an intellectually stimulating piece of journalism with integrity, quite the opposite, the point is to be purposely hyperbolic and personally attack opponents. It’s the ‘Your mum is fat!‘ before the schoolyard fight. We find throughout the article, all the emotive buzzwords that possess little thought, do not engage with actual arguments, and are simply designed to poke at the emotions of the reader; “neoconservative”, “neo-Nazi“, “genocidal“, “colonialism” “fascist“, “racist“, “white supremacist“, with a quick dose of “Anders Breivik” and “ethnic cleansing” thrown in, just to make sure the reader knows for certain that Bill Maher is actually Josef Goebbels. The whole piece is reminiscent of Fox News unable to go three minutes without having to refer to the President as a communist, socialist, Marxist, anti-Christian, Muslim born in Kenya and probably gay. It isn’t a respectable form of journalism, it is throwing shit in the hope that some of it sticks. It is also so narrowly focused on attacking the targets (in this case – as in most of Werleman’s recent tantrums – Sam Harris & Ayaan Hirsi Ali, through hideous distortions) that it’s easy for Werleman to not recognise the creeping bigotry in his own rhetoric.