Oaths of Allegiance have been taken in Parliament by the SNP MPs aka #team56 (not #the56 after it was realized, long after their supporters had piled into this hashtag, that it had been established for the 30th anniversary commemorations of the Bradford City fire).

I would say all did so in the “Scottish style”, although Alistair Carmichael appears to have been the first to do so yesterday.

There had been concerns that at least some of them would insist on doing so in Gaelic or snubbing the oath of loyalty to Queen Elizabeth, her heirs, and her successors. Yesterday, Rory Stewart pre-empted the first by asking if he could do so, only to be told that unless he was a fluent speaker not to. It was with sigh of relief that I saw none doing the second. 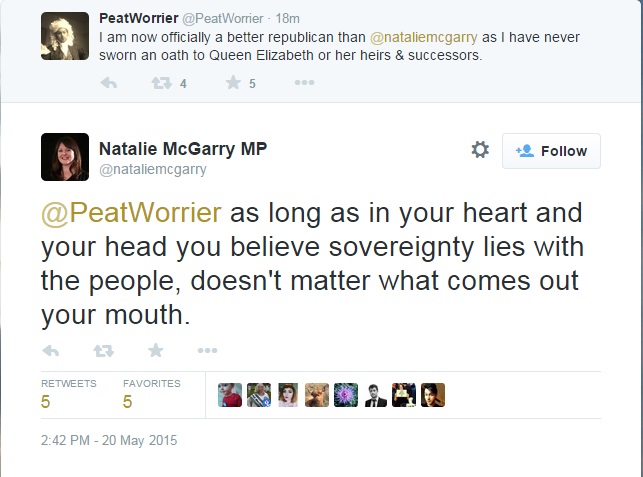 The tweet was removed within minutes after followers asked if this meant her first words in Parliament were a falsehood. She had better be careful: this is a grown-up Parliament where the committee system has not been subverted by her Party and control of the floor passed to her aunt. It will see the telling of falsehoods in a very dim light.

At least Sinn Fein does not pretend to take the Oath.

In other news, the immediate successor of Queen Elizabeth is willingly shaking hands with the murderers of his uncle.

Update: Unexpectedly, she has had to justify herself to a proper Parliament and non-compliant media:

She later deleted the tweet and explained: “I will keep my oath to respect the parliament, but I am a republican. It’s not a secret.”

That is okay, then. Hint, it is not. You are going to have this tweet quoted back to you for a long time to come.

@gavsuave I'm with you. I told gent that hell would freeze over before I'd swear any oath to queen. He's looking forward to voting Yes.

Come to think of it, it is a chilly spring.

Update 3: and it is not just new MPs who are jettisoning deeply held political beliefs at the first sniff of power (and £74k salaries plus expenses). With the prospect of a repeal of the hunting ban looming, an inconvenient self-denying ordinance on not voting on matters affecting only England & Wales has gone down like a bucket of cold sick with their progressive friends down south.

Legislation over fox hunting is devolved to the Scottish Parliament, and Scotland took the opportunity to ban fox hunting in 2002, some two years before the legislation passed south of the border. There are no plans to repeal this legislation.As regards any legislation to repeal the ban in England and Wales, the SNP Group at Westminster has not yet decided its stance. While SNP MPs have tended not to participate in votes on domestic English/Welsh legislation which do not apply to Scotland, the party’s Westminster Group will not decide a position on this matter until such time as any proposed legislation can be studied and assessed.

Unfortunately, this is not what it had said a few hours previously:

The SNP has a long-standing position of not voting on matters that only affect England. The Hunting Act is one such matter that purely affects England and Wales, and so SNP MPs would not vote on this issue. However, SNP MPs will always be a voice for the protection of our environment and wildlife.
The Protection of Wild Mammals (Scotland) Act was passed by the Scottish Parliament in February 2002, making Scotland the first part of the UK to ban traditional fox hunting and hare coursing. There are no plans to repeal the Act in Scotland.

What a shower of incompetent cockwombles.