The Fathom editors are proud to launch a new longer-form publication. Each ‘Fathom Insight’ will allow writers and readers to explore in greater depth a range of key contemporary debates about Israel’s future, regional dynamics, and the global rise of the ‘new antisemitism’. In this inaugural ‘Insight’, Kenneth Waltzer –  the former director of the Jewish Studies program at Michigan State University (MSU) – offers some urgent critical reflections on the growth of antisemitism in Europe. 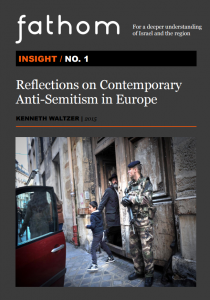 Authorities in Oslo, Norway, have permanently closed streets to traffic around the Jewish synagogue. In Berlin, Germany, the Jewish community newsletter is sent without any identifiable markings on the envelope, so as not to ‘out’ recipients as Jews or members.

In Amsterdam, police trailers stand before the 17th century Portuguese Synagogue, the Jewish high school, the Anne Frank Museum, and other institutions. Military police guard the buildings, and Jewish leaders desire that they carry automatic weapons. In Antwerp, an elite army unit patrols the Jewish quarter.

One small group of European Jewish leaders, the European Jewish Association, petitioned the European Union in January to pass new legislation permitting Jewish community members to carry guns ‘for the essential protection of their communities.’ Observers say that, 70 years after the Holocaust, Jew-hatred is spreading in Europe. Jews are seeing their religious freedom violated, their grave sites vandalised, their synagogues desecrated, and Jewish lives lost.

In Paris, an Islamic extremist tied to the Charlie Hebdo killers took over the Hyper Cacher kosher grocery and wantonly killed several Jewish hostages. TheCharlie Hebdo killers themselves murdered only one woman, a Jewish woman, at the journal’s offices, intentionally sparing all others. Soon after the events unfolded in Paris, another jihadist in Copenhagen attacked a free speech gathering, and then murdered a voluntary Jewish community guard outside a bat-mitzvah. In each of these events, Jews were coerced to cower in basement hiding places, as if in a classic Bialik poem, to avoid being massacred.

But such recent events hardly stand alone, following a year during which large public marches in Paris, Brussels, Berlin, and elsewhere included demonstrators calling on Jews to leave France, Belgium, or Germany, and chanting that Hitler didn’t finish the job. ‘Jews to the gas, Jews to the gas!’, hundreds of demonstrators marching away from the Bastille in Paris called out in mid-July. Mob actions occurred against synagogues and Jewish stores in and around the city, including at the Don Abravanel Synagogue; further mob action came a week later at a synagogue in Sarcelles. Moreover, the events in 2014 came after a rising number of killings since the early 2000s, culminating in jihadi killings of children in Toulouse in 2012 and of tourists at the Brussels Jewish Museum in 2014. The brutal slaying of a Jewish child in 2012 by a jihadist was even celebrated by some French Muslims on social media.

What is going on? How shall we understand the shape and meaning of contemporary anti-Semitism in Europe? How shall we begin to come to terms with the rising danger? READ MORE