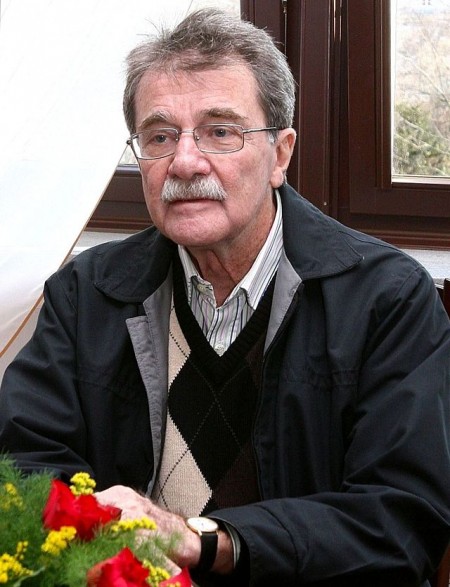 The anti-Chavista democratic Left in Venezuela is too often ignored. But if it has one figure most worthy of respect and admiration, that figure is Teodoro Petkoff.

Petkoff is a former Communist, a former guerilla fighter and a former political prisoner. After the 1968 Soviet invasion of Czechoslovakia, he rejected left-wing authoritarianism and in 1971 founded a party of the democratic Left, the Movimiento al Socialismo (MAS). An economist, Petkoff has been a presidential candidate and an elected congressman. In 1996 he became minister of economic planning in the government of President Rafael Caldera. After his tenure in the Caldera administration, he became director of the newspaper El Mundo, and then founder and director of the opposition newspaper Tal Cual, where he has bravely challenged the regimes of Hugo Chavez and his successor Nicolas Maduro, especially on matters of press restrictions and self-censorship.

In 2005 he was gracious enough to answer some questions from Harry’s Place.

For his devotion to press freedom in Venezuela, Petkoff has been honored by the Spanish newspaper El País with its Ortega y Gasset Award.

Unfortunately he was unable to travel to Madrid for the ceremony; the Venezuelan regime has barred him from leaving the country. Instead he addressed the ceremony in a video.

“I have a country that is my jail,” said the 83-year-old publisher of the daily Tal Cual in a sharp, clear voice that boomed throughout the auditorium.

The recipient of this year’s career achievement award had been prohibited from leaving Caracas by Venezuelan President Nicolás Maduro as he faces a series of libel and defamation lawsuits filed against him by the authorities over reports that have appeared in his newspaper.

Here’s an example of the kind of reporting that gets independent Venezuelan media like Tal Cual in trouble these days. Here’s another.

In March, it was forced to close its print edition after the government began making it difficult for some publishers to obtain imported newsprint. TalCual continues as an internet operation.

Petkof said TalCual was the “voice of the best interests and aspirations of us Venezuelans who want to live in a country that is democratic, open and safe for all.”

In his brief but forceful remarks Petkoff, who ran for president on several occasions in the 1980s, accused the Venezuelan government of infringing on fundamental rights. “This prize goes to the brave Venezuela, which insists on living democratically,” he said.
…..
Special focus was on the presence of former Spanish Prime Minister Felipe González, who accepted Petkoff’s award on his behalf.

González has said that he will travel to Venezuela on May 17 to help in the defense of two jailed opposition leaders despite the fact that the country’s lawmakers have officially declared him persona non grata.

He called Petkoff “the irrepressible critical conscience of the left that believes in freedom for readers and voters. That is why he annoys so many people so much.”

I think we would have no trouble identifying some of those people.

Petkoff is a living, breathing reproach to those who believe that anyone who opposes the Bolivarian regime in Venezuela can’t be a true leftist.

A true leftist, of course, would stand in solidarity with him.