General Robert E Lee surrendered to General Ulysses S. Grant on 9th April 1865, one hundred and fifty years ago. What do Americans make of this? Has this historical event been as marked as the outbreak of World War I was marked here in 2014? During the extensive coverage everyone spoke of their family connections to that conflict as well as of the nations lurching and clashing.

Gore Vidal said of the American Civil War:- “my mother’s family had fought for the Confederacy and my father’s for the Union, and that the Civil War was – and is – to the United States what the Trojan War was to the Greeks, the great single tragic event that continues to give resonance to our Republic.”

Vidal took what was the well educated view of his time (1986), that the war was to preserve the Union rather than to abolish slavery. The causes of the civil war are contested and revised and here’s a piece taking a different angle. It’s closely argued and difficult to quote except in its entity, so please read the whole thing:-

On November 6, 1860, the six-year-old Republican Party elected its first president. During the tense crisis months that followed — the “secession winter” of 1860–61 — practically all observers believed that Lincoln and the Republicans would begin attacking slavery as soon as they took power.

The author’s point is that contemporaries did see the war as being about slavery as those on the allied side saw World War II as being about Nazi aggression.

The Nazi analogy will offend some but the War Nerd has no doubts and so lauds Sherman for his march from Atlanta to the sea, burning as he went, as the proper and absolute strategy for the defeat of a vile ideology:-

Atlanta was burned by William Tecumseh Sherman, the greatest general in American history. Damn right. That’s not a matter of blame, but of sound military sense.

What Southern romanticists… will never get—because it’s their very nature not to get it, just as a paranoid schizophrenic can never get that no one is persecuting him—is that Sherman’s whole military enterprise was an attempt to stop the slaughter by slapping the South into adulthood. From way before the war, when Sherman was a professor at a military academy in Louisiana, his attitude toward the South’s Planter culture was like a fond uncle watching his idiot nephew stumbling into a fast car, planning to drive drunk into the nearest tree.

He quotes Sherman – a general who wrote like no American general could or would write today, alternating as they do with militaryese and private profanity:-

You people of the South don’t know what you are doing. This country will be drenched in blood, and God only knows how it will end. It is all folly, madness, a crime against civilization! You people speak so lightly of war; you don’t know what you’re talking about. War is a terrible thing! You mistake, too, the people of the North. They are a peaceable people but an earnest people, and they will fight, too. They are not going to let this country be destroyed without a mighty effort to save it … Besides, where are your men and appliances of war to contend against them? The North can make a steam engine, locomotive, or railway car; hardly a yard of cloth or pair of shoes can you make. You are rushing into war with one of the most powerful, ingeniously mechanical, and determined people on Earth — right at your doors.

In another article the War Nerd considers the military occupation badly executed due to the insufficient hanging of Confederate officers. Those unhanged went on to continue with terrorism like the displaced Sunni after the invasion of Iraq, hiding their faces in white masks and spouting about the sons of Ham as they persecuted their former helots, as the displaced Sunni cover up with black masks and spout the Qu’ran.

it’s clear that the policy the Union actually pursued—not hanging any Southern officers except the miserable wretch who commanded Andersonville POW camp—failed miserably. A decade after we defeated the Confederacy at the cost of 300,000 loyal Union soldiers’ lives, the same planter oligarchy was running the South again, terrorizing the Freedmen and women who were our only loyal allies during the war, making sure black people never got a chance to vote, running them off their farms, doing their best to recreate slavery without the name.

This less abrasive article considers the Occupation as being ended too soon:-

A full-scale military occupation continued for at least another five years, and without it, slavery may have persisted far longer than it did. Almost 100,000 Army soldiers remained in the South through the end of 1865, .. with up to 20,000 troops stationed there until 1871. ..

the final end to slavery, and the establishment of basic civil and voting rights for all Americans, was “born in the face of bayonets.” Put simply, the military occupation created democracy as we know it.

The outcome of American occupation of defeated peoples have obvious parallels with Iraq (failure), and Germany (success).

Historians of the post–Civil War period—aka Reconstruction—have been chary of studying the military’s role, in large part because Southern apologists have used it to claim themselves the victims of an overzealous federal government. …

Congress had to impose martial law in order for blacks to gain basic freedoms. If military officers sometimes vacated racist local laws, if they removed ruthless sheriffs and judges, if they tried white supremacists in unfair military tribunals—all of which they did—they did so for necessary ends. Equality would come to the South no other way.

But as with other American occupations, they got fed up and went home, leaving the place to fester.

Similar campaigns of terror occurred wherever and whenever the military left. In Georgia, Congress briefly pulled back the military after its first biracial elections in 1868. The result? Elected white officials refused to sit their elected black colleagues while 400 white vigilantes massacred 20 black men for marching in a political parade. Throughout the South, whites immediately voted black and white Republicans out of office, electing dozens of klansmen in their place.

Democracy when it came, would be through the blacks themselves and their Civil Rights movement a century later. So the last time I saw the Confederate version of the St Andrews Cross was in the film Selma, where it was waved by a lot of thugs at the Civil Rights activists marching to Montgomery.

On the 150th anniversary the song The Night they drove old Dixie down went on to Facebook, and for its 5 minutes I could think “tragedy” instead of “well-deserved thrashing. “

In the way of a good ballad it tells as much in its three verses as a novel would do in 300 pages, of the displaced Southerner Virgil Caine. Stoneman’s cavalry tears up the railway tracks – well, this was the first railroad war. Virgil Caine goes back to chopping wood and working the land – the rural south vs the industrialised north. The proud and brave older brother in his grave by eighteen haunts like the thousands images we see of the young soldiers in this much photographed war. When I read Edmund Wilson’s great anthology of Civil War writings, Patriotic Gore, the good grammatical plain English and excellent hand-writing of ordinary people in the nineteenth century as well as of generals like Sherman and Grant were familiar. Those Anglos in a plantation colony are recognisable kin.

What I know of this war is through my heart and mind but Americans must feel it in their blood and bones. What do they make of it? Or has it become something like the Napoleonic Wars – interesting, but distant and unfelt. It nearly half a century since The Band sang that song in The Last Waltz.

Gene adds: I took this photo this morning about a mile-and-a-half from where I live in Lexington Virginia: 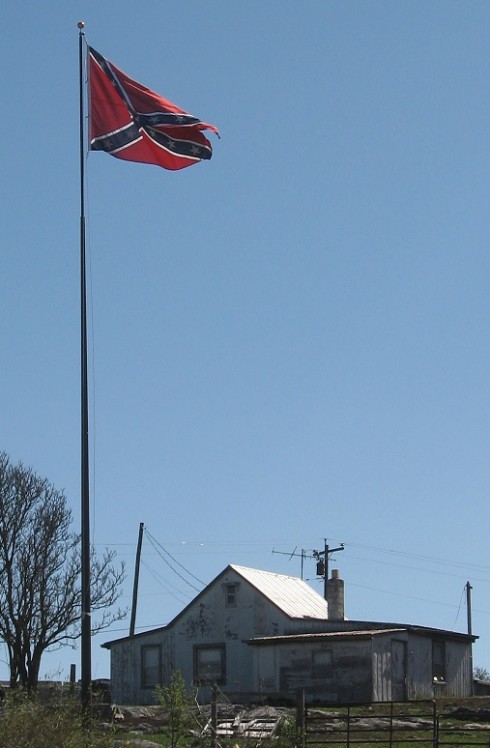 Lexington is the burial location of Robert E. Lee and Stonewall Jackson. Lee is buried in a chapel at Washington and Lee University, where he served as president after the war and where my niece is now a professor.

Lexington is a largely liberal and Democratic town surrounded by much more conservative and Republican rural areas. A few years ago the city council voted to allow the display only of the United States and Commonwealth of Virginia flags, effectively banning the display of Confederate flags on city property and causing outrage among groups such as the Sons of Confederate Veterans.

More recently the removal of a Confederate flag from the Lee Chapel caused another brouhaha.

Living in Lexington is a constant reminder of William Faulkner’s truism: “The past is never dead. It’s not even past.”