Khalid al-Fikri is an Egyptian hate preacher who has found a refuge in the UK. It is a good place for him – he can promote his awful messages with no consequences.

Here’s another part of the record which is not widely known. When US forces killed Osama bin Laden in May 2011, extremists led by Anjem Choudary staged an angry march in London. Al-Fikri joined in. He’s the man on the bottom right of this picture. 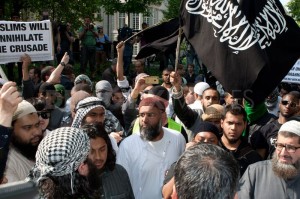 This is a video from the march. Al-Fikri shouts for Omar Abdel-Rahman, the spiritual leader of the New York bomb plotters of the early 1990s. Abdel-Rahman was convicted of seditious conspiracy and sentenced to life in prison. Al-Fikri also speaks up for nasty extremists Ali al-Tamimi and Aafia Siddiqui in the clip. America rightly prosecuted and convicted both of them for very serious offences.

In another video from that day you can see al-Fikri embracing Anjem Choudary.

Mr al-Fikri frequents a number of London mosques and student Islamic societies. One place where he is often welcomed is the Noor mosque in Acton. It too has a bad record.

I trust Khalid al-Fikri and the Noor mosque are in the frame at the Home Office, especially after the latest “the game is up” rhetoric.