Zahir Mahmood is another Islamist preacher on the circuit of MEND, the Islamist political agitation group. 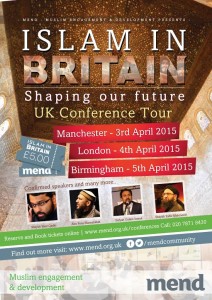 Like Yasir Qadhi and Abu Eesa Niamatullah, Mahmood is an excellent match for MEND.

Consider Mahmood’s enthusiastic backing for Hamas. He was a leader of Viva Palestina, George Galloway’s Hamas support operation. Here he is, very excited, at a Viva Palestina rally.

And the other thing is that we cannot allow the perverted narrative to remain the norm. Hamas are not terrorists. They’re freedom fighters, they’re defending their country.
…
Alhamdulillah, Ismail Haniyeh [the Hamas leader in Gaza], the prime minister of Palestine, has given all those who went on the convoy Palestinian passports. We are Palestinian nationals! [the audience applauds]

In the same speech Mahmood says Palestinians have spent “60 years living in an open concentration camp”.

Hurling this kind of “you are Nazis” abuse at Jews is beneath contempt.

Not for Zahir, though. He loves it. In another talk titled “Gaza Through Our Eyes” the line comes out again:

It is amazing, isn’t it, that the children of the Holocaust survivors have now created the largest concentration camp on the face of the earth.

A few minutes later in that talk he can’t resist returning to the abuse:

It’s amazing, isn’t it, that the children of the Holocaust survivors adopt Hitler’s tactics because this is what Hitler would do. If any soldier was killed, he would kill 400 of the resistance.

In the same talk Mahmood makes it clear that he is enraptured by wonderful Ismail Haniyeh. He even cries when he prays, don’t you know!

By the way, this is a scene from one Viva Palestina convoy that illustrates the hypocrisy at work here. It is a gushing report from the Iranian propaganda channel Press TV about the convoy’s warm welcome from the Ghedaffi regime. That odious regime also provided material support to Galloway’s rabble.

Mahmood too has spoken fondly of the Libyan welcome and how it contrasted with the unsurprising suspicion which greeted a bunch of Hamas loving thugs in other Arab countries.

Zahir Mahmood is far from the only Hamas fan in the MEND camp. Here is Ibrahim Hewitt speaking at one if its events in Leicester just a few days ago. Hewitt heads Interpal, the main Hamas service bureau in the UK. 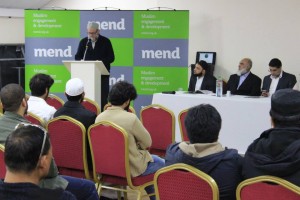 Here’s Hewitt with his master. 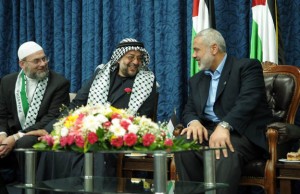 Moreover, MEND’s very own “Head of Community Development” is none other than Azad Ali. He adores Haniyeh:

So, since we are all working our socks off, in different ways, for the resurgence of the Khilafa, I have one question who would you give bayyah to today and what would you say are the qualities needed for them to get your vote?
…
My vote for the title of Amir al-Mu’mineen would have to go to the Palestinian Prime Minister, Ismail Haniyeh. Not only is a motivational leader, with political depth and skill, but also he is a Hafiz of the Qur’an, Mashallah!

Name me one other Muslim leader that is currently leading his people in salat al-Tarawih? I cannot think of another single leader that can lead his people like this! So for me, once meeting the obvious requirements to be Khalifa – what tipped my vote for Ismail Haniyeh was the knowledge that this leader was truly a servant of Allah.

Baroness Warsi is due to speak at a MEND event in Manchester on 3 April, after joining up with them in Parliament. 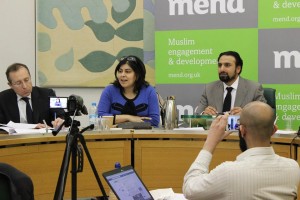 She has chosen a mighty fine camp, hasn’t she.