You have seen American preacher Yasir Qadhi’s backwards “women shouldn’t work” message. Qadhi will speak alongside Baroness Warsi next month at an event in Manchester organised by MEND. MEND is the Islamist political agitation outfit of Sufyan Ismail, Shenaz Bunglawala and Azad Ali. 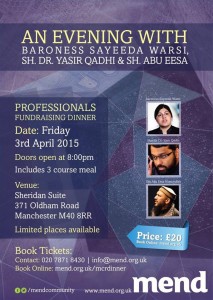 Another speaker at the event is Manchester preacher Abu Eesa Niamatullah, a friend of Qadhi. For his part, Niamatullah is quite frank on the topic of women and the workplace, as reported today in the Telegraph:

I am an absolute extremist in this issue in that I don’t have any time for the opposing arguments. Women should not be in the workplace whatsoever. Full stop. I simply can’t imagine how we will safeguard our Islamic identity in the future and build strong Muslim communities in the West with women wanting to go out and becoming employed in the hell that it is out there.

There’s much more in the article about MEND and its multiple associations with nasty extremists which may interest readers.