The exposure of the alleged identity of one of the most murderous ISIL terrorists over the last few weeks has seen some seeking to excuse the terrorists and point the finger of blame at the agencies themselves.

This was widely seen as a swipe at Asim Qureshi and his terrorist support group Cage.

There could be no better target for the swipe.

Here is another case in point.

Most people won’t have a single kind word for Russian forces blasting Chechnya or Chechen jihadis killing civilians. Asim Qureshi of Cage does have a side, though, and he is particularly enamoured of some of its very worst.

In 2006 and 2007 Qureshi gave a number of talks to the student Islamic society of Queen Mary University in London. The topic of one of them was “The Truth About Chechnya”. It’s a classic apologist act, this time on behalf of the “Black Widows”, the Chechen women who have slaughtered civilians in Russia in attack after attack. From the recording:

Their sole mission is to fight against the Russians. They have dedicated their lives to doing so. And their policy is to do whatever it takes. That’s the extent to which they have gotten to.

Now, in an interview that I read off the BBC World Service with one of the sisters who belongs to the Black Widows she said, regarding her situation, I am going to read this. “I have only one dream now, only one mission, to blow myself up somewhere in Russia, ideally in Moscow, to take as many Russian lives as possible, this is the only way to stop the Russians from killing my people. Maybe this way they will get the message and leave us alone forever.”

Awful. But not for Asim. No, we should “understand”:

But it’s important to understand the mentality of these people for the sake of understanding them and understanding the situation. Do not be so quick to just say “it’s got nothing to do with us, it’s got nothing to do with Islam”. Understand, because without understanding you’ll never be able to explain why these people do what they do. You don’t have to justify it. You didn’t do it. You don’t have to apologise for anything. You didn’t do it. But understand it so you can explain to others why they do it. Why is it that they feel the need to do these things?

In fact, it would be “shameful” to speak up against the Black Widows:

What have the shuyookh (sheikhs), what have the ulama (scholars) of Chechnya said about their situation? Because we are not here to judge them. We do not live in their paradigm, we do not live their daily lives. Who knows the situation there best? Their ulama. So when their scholars come out and give fatawa (Islamic rulings) regarding what’s permissible and what’s not, then we say khalas (enough). It’s up to them to decide what’s best for them because they are living in that land and we say they know best and Allah knows best. It’s that simple.

You do not need to apologise for anything. You do not need to become scared and say, you know, “I am really, really sorry that something happened all the way in Chechnya”. It’s got nothing to do with you. In fact, it’s shameful that you should apologise for such a thing because you’re not living in that paradigm. Allow the people who are living there to defend themselves. Give them that opportunity, that right. And give their scholars the respect they deserve in order to make the decisions for them. 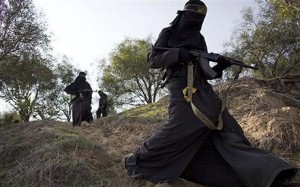 You can read the BBC interview Qureshi found so appealing here. It includes a rather different take on the woman we are asked to “understand”:

Moscow-based British journalist Mark Franchetti, who tracked Kowa down, described her as an emotionless “brick wall”.

“The most chilling and in many ways depressing thing about meeting her was the complete lack of emotion with which she spoke about what she was about to do,” Mr Franchetti said.

“Especially considering she was so young, and she has a small child, she was a brick wall – no emotions whatsoever.

“She spoke in a pre-programmed way, almost as if she was dehumanised.”
…
“I have no doubt that she made the decision herself, but I think to a certain extent she has been also brainwashed from a religious point of view,” he said.

“[Her religion] is quite superficial – when I tried to press her about her religious faith she was not really able to explain it very well.”

The Queen Mary Islamic society was one of Britain’s very worst around the time Qureshi spoke up for the Black Widows.

Don’t forget Qureshi also told Queen Mary students that they could of course go to jihad in another talk in that period.

In those years Cage and its fellow extremists faced very little opposition. Happily, times have changed. It is a good thing that so many people now see Cage for what it is – a pillar of the terror community.

So when we see the example of our brothers and sisters fighting in Chechnya, Iraq, Palestine, Kashmir, Afghanistan then we know where the example lies. When we see Hezbollah defeating the armies of Israel, we know what the solution is and where the victory lies. We know that it is incumbent upon all of us to support the jihad of our brothers and sisters in these countries when they are facing the oppression of the west.