or Iqbal Bhanna OBE who was attacked for acknowledging the positive role bodies like the Islamic Human Rights Commission, an organization with UN consultative status, can play.

I am delighted to send this message of welcome for the Islamophobia Awards Ceremony and for the valuable work of the Islamic Human Rights Commission, and I am proud to have been  involved in some of their work.

I am sorry I cannot be here, but it is my pleasure to write in support of this year’s Islamophobia Awards and the valuable work of the Islamic Human Rights Commission. It is important to work together within a variety of fora to counter discrimination targeted at the Muslim community.

The fact that prejudice and ignorance are ridiculous doesn’t – unfortunately – make them less lethal. But it is important from time to time to be reminded that they are ridiculous, and that’s why this event is so welcome. Some theologians have contrasted the light-heartedness of heaven with the fact that the devil and his angels take themselves with deadly seriousness, even when engaged in the most absurd project possible, resisting the all-powerful goodness of God. I hope this evening will make some contribution to delivering us from deadly seriousness and recall us to the joy that faith opens for us.

I’m really pleased to see the Islamophobia Awards returning this year for what I know will be a very fun evening with a serious message.  Discrimination and prejudice in all their forms are completely unacceptable but, sadly, they persist. With the current climate of anti-immigration rhetoric in the media, I am particularly concerned about rising xenophobia and Islamophobia. That’s why the work of the Islamic Human Rights Commission is so important.

I like the way it works, I like the sense of values surrounding it, and I’ve found them extremely helpful in bringing cases to my attention of individual abuses of human rights that they’re concerned about. But also general issues concerning the rights of people in the Middle East. The situation in Iraq and Afghanistan. And I’ve found them generally extremely helpful, extremely positive, and help to challenge the notion that human rights is somehow or other something based on Romano-Christian law and based on Europe rather than the rest of the world.

When so much conspires together to deepen suspicions in our society and to reinforce negative stereotypes, it is crucial to have people who challenge this, wherever it appears, and to turn us back to more generous and constructive relationships. These awards are of great significance in such a task and I send my congratulations and warm greetings to all involved. – Dr Rowan Williams

The general election will be the most racist one in living memory with politicians from every mainstream party engaging in vicious scapegoating of Muslims and immigrant communities. In the student movement, we face an increasing number of hate crimes on our campuses, attacks on women’s right to wear religious dress, and a strengthening of the divisive PREVENT agenda. That’s why we must renew our efforts to stand up to Islamophobia and racism in every way, and the Islamophobia Awards 2015 provide an excellent opportunity to do that through real thought-provoking satire. – Aaron Kiely; NUS National Executive Council

Modern Britain is in many ways a very tolerant place. But Muslims can be singled out for contempt and derision in a way that no other minority is expected to endure. Muslims can be verbally abused, spat at, and sometimes physically attacked. Crude caricatures appear in the press. There are even cases of mosques being burnt down. Yet wider British society is largely unaware of or indifferent to the problem. This is why thee Islamophobia awards are so very important. The message must get out. – Peter Oborne; Chief Political Commentator at the Daily Telegraph

… the awards have a serious aspect in that they also recognise the efforts of individuals and groups who have striven to combat Islamophobia.

Imam Achmad Cassiem – A veteran of the anti-Apartheid struggle in South Africa, Imam Cassiem is a veteran campaigner against racism and Islamophobia. He joined the armed struggle against the oppressive apartheid regime as a 15 year-old boy and at the age of 17 became one of the youngest people to be imprisoned on Robben Island alongside Nelson Mandela. Today, Achmad Cassiem is an Imam and Founder of the Islamic Unity Convention in South Africa and a tireless campaigner against Islamophobia on a national and international level.

[For more on Cassiem, see here]

IHRC: International Islamophobe of the Year 2015:

There are also no prizes for guessing the winner of the “International” category.

The French satirical magazine Charlie Hebdo which was the target of a murderous attack in January won the prize here for its continual stoking of Islamophobic sentiment by caricaturing Muslims as terrorists and ridiculing their beliefs.

Charlie Hebdo’s repeated mocking of Muslims is part of a culture of hate that is intended to marginalise, further alienate and further endanger a community that has effectively been “otherised” in much the same way that Jews were in Nazi Germany.

Gene adds: Harry’s Place was nominated for one of the Islamophobe awards in 2006. I never found out if we won.

A further update: Jesus and Mo catch up with the news: 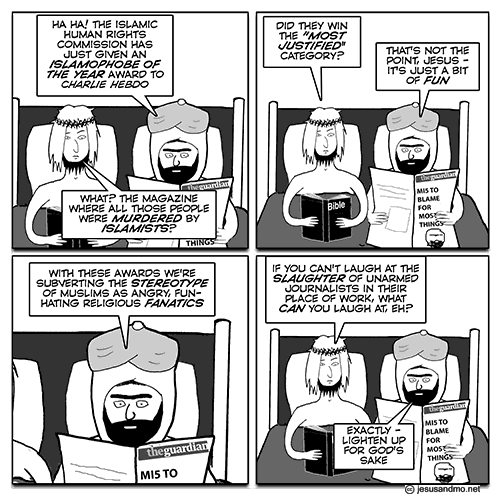 And here is the video of Corbyn singing the praises of London Khomeinists. The backdrop is the Islamic Centre of England, another outpost of the Iranian regime in London. The video was made by the IHRC and placed on its video propaganda site.