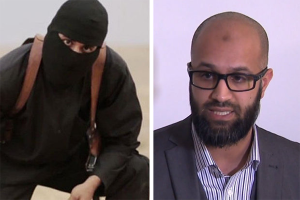 SYMPATHY FOR THE DEVIL: Mohammed Emwazi (Left) and Asim Qureshi of CAGE (Right)

You might be surprised to know, but the Mohammed that I knew was extremely kind. Extremely gentle. Extremely soft-spoken. [He] was the most humble young person that I knew. We’re gonna release all the emails . . . and what you’ll see when you read those emails is somebody who, despite going through great difficulties in his personal life, he belittled that difficulty.

These were the now-notorious words Asim Qureshi, research director for the Islamist pressure group CAGE, used to describe Mohammed Emwazi, a British Islamic State fighter wanted for his part in the beheading of at least 5 hostages. They were offered at a catastrophic press conference called by CAGE in the wake of the Washington Post’s unmasking of Emwazi as the IS executioner hitherto known as ‘Jihadi John’. CAGE, the Post revealed, had been in contact with Emwazi before he left for Syria.

Listening to Qureshi’s lachrymose little eulogy, I was reminded of a Guardian profile of Mohammad Sidique Khan, published just one week after the 7/7 terror atrocity, which had claimed the lives of 52 people and maimed a further 700. It was headlined Mentor to the Young and Vulnerable, and it began like this:

Born in Leeds, suicide bomber Mohammad Sidique Khan spent his working life with young, vulnerable children. The 30-year-old, father to a 14-month-old daughter, Maryam, was a mentor in primary schools for children with learning difficulties. He is known to have taught hundreds of children [. . .] One child who was taught by him at Hillside said: “He seemed a really kind man, he taught the really bad kids and everyone seemed to like him. He was there about three years and then he went on holiday and never came back. We just knew him as Mr Khan.”

The narrative being advanced in both instances is of a harmless individual, naturally inclined to selflessness and compassion for the disadvantaged, transformed into a pitiless foot-soldier for the Islamist slaughterhouse by the actions and policies of the West.

The Guardian’s profile of Khan had appeared under the joint byline of its then-crime correspondent Sandra Laville and a 27 year old trainee named Dilpazia Aslam. The day before, the Guardian had published an opinion piece by Aslam entitled We Rock The Boat: Today’s Muslims Aren’t Prepared to Ignore Injustice. “I think”, Aslam had written…

…what happened in London [on 7/7] was a sad day and not the way to express your political anger. Then there’s the “but”. If, as police announced yesterday, four men (at least three from Yorkshire) blew themselves up in the name of Islam, then please let us do ourselves a favour and not act shocked.

“Shocked,” he went on, “would be to suggest that the bombings happened through no responsibility of our own.” This responsibility, he explained, lay with British support for the US-led war in Iraq in general, and the counter-insurgency operation in Fallujah in particular. Aslam noted that the Iraq war had resulted in “22,787 civilian Iraqi casualties to date”, but neglected to mention that the vast majority of these were victims of the same jihadist terrorism that had just been visited upon his fellow citizens in London. Apparently, the injustice of Muslims – both Sunni and Shia – being blown to pieces in the marketplaces and mosques of Iraq by their co-religionists was not sufficient to stir his sense of moral outrage.

KURDISH-LED SDF FORCES IN SYRIA: ISIS PRISONERS NO LONGER ‘OUR RESPONSIBILITY’ AS FIVE ESCAPE AND THOUSANDS MORE AT RISK OF BREAKING FREE