Peter Oborne has resigned from his post of chief political commentator at the Daily Telegraph.  Reasons given:- that out of deference to its advertisers the Telegraph did not cover the HSBC tax evasion scandal and also because the old conservative (small and big “C”) newspaper has been losing its direction and its traditional readership.

I had some sympathy with him because Private Eye has been reporting passim the way the Daily Telegraph has been dumbing down for the new digital age.  I’m happy to harrumph along with Peter Oborne that the editor has now been replaced by three “Heads of Content” and that they have lost touch with their conservative readership in pursuit of the clicking generation.

Solecisms, unthinkable until very recently, are now commonplace. Recently readers were introduced to someone called the Duke of Wessex. Prince Edward is the Earl of Wessex. There was a front page story about deer-hunting. It was actually about deer-stalking, a completely different activity. Obviously the management don’t care about nice distinctions like this. But the readers do, and the Telegraph took great care to get these things right until very recently.”

Getting deer stalking and deer hunting  confused may make yer Guardianasta smirk, but if a good publication  appears ignorant to its usual readers, it will lose them.  A lumber magazine produced in the USA calling two-by-fours four-by-twos would piss off those who would subscribe to it, (though I can’t but laugh over mixing up the royal Wurzels.). But not covering a significant story about tax dodging for commercial reasons is a black mark against a solid newspaper.

However a friend of mine has a different take:-

“On Monday, the Telegraph claimed that somebody called “Baruch Dayan” had left a note commemorating the murder of the security guard at the Copenhagen synagogue. That’s part of the honorarium in Hebrew for a dead person, not a name.

So yes, The Telegraph is a shit newspaper. As Oborne notes, it doesn’t know the difference between “deer hunting” and “deer stalking” either.

All newspapers are shit at the moment. The reason is simple. People won’t pay for news, and so newspapers don’t employ competent reporters. They report opinion piece writers who state stupid ideas, as clickbait.

The Telegraph is particularly guilty of this. And Oborne was a prime mover of the ‘troll your readers’ movement that has taken over “news reporting”.

I’d add that Oborne’s piece on Interpal and UWT were a disgrace and whitewash. These are charities which exist to funnel money to Hamas and the Muslim Brotherhood movement. Oborne defends them because he’s a partisan supporter of the Muslim Brotherhood. I suspect that what motivates Oborne in his affection for these organisations is part genuine belief in the virtue of their politics, and part admiration for the fact that they’re fighting the Jews. Ditto his perspective on Iran and its nuclear programme and his Dispatches on the Israel Lobby.

At the end of last year, Oborne spoke at the IHRC conference on Islamophobia. The IHRC is an Islamic Republic of Iran aligned “human rights” organisation which proposes a vision of “Islamic human rights” that – unlike normative human rights – is free from Zionist Jewish influence.

Oborne makes some charges about The Telegraph’s coverage of HSBC. I haven’t taken my news on the most recent HSBC scandal from The Telegraph, so I don’t know whether his complaints have legs. They might do. I quite often note the failure of major newspapers to report properly on issues, and am prepared to ascribe the worst of motives to that default. But, given that HSBC is in Oborne’s cross-hairs primarily because he disagrees with their risk based decision to stop providing banking services to people with clear jihadist connections – something that the US enforces against as mercilessly as they pursue tax evasion – I suspect that this is the major driver of his fallout with The Telegraph.

Oborne is like a character from a Le Carre novel. I bet he sees himself as a sort of George Smiley character: the last surviving upholder of English values, whose wife’s sexual betrayal is a metaphor for the ‘cuckolding’ of Britain by the modern age.

He is a very particular kind of Englishman, disappointed.  My guess is that he’ll shortly announce his move to Al Jazeera or,  like The Guardian’s David Hearst, the Hamas thinktank, Middle East Monitor.”

Update:- The Torygruff has again done itself no honour with its blustering editorial, which actually sounds a bit like George Galloway.  it ignores a huge fact – i.e. that its senior political commenter has quit over the HSBC issue; it flails around at lefty publications like the BBC and The Guardian; it boasts of its past glories; and it closes its comments. 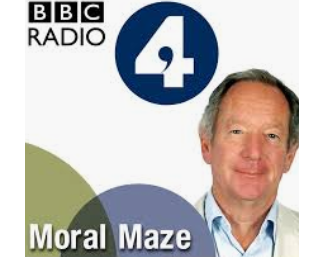 Debating Islamophobia on The Moral Maze