J-Street has put up an expensively designed online petition which invites US Jews to sign up to say that Benjamin Netanyahu, who, like all Israeli leaders, claims to speak for the Jews of the world as well as Israel, does not speak for them.

J-Street. Totally unelected. Bankrolled by the totally unelected George Soros and other donors including Arabs and friends of Iran. Bibi Netanyahu, democratically elected coalition government leader of the largest group of Jews in the world, 46%+ of the total of the world’s Jews, plus supported by the world wide zionist groups who elect representatives to support them at the World Jewish Congress.

Only supporters of totalitarianism support the view that a democratically elected leader represents the actual views of every single person in her or his constituency. He has as good as mandate as any political leader in the world to speak for the Jews of the world. J-Street is for narcissists who like to think that unless the leader agrees with their personal views, it’s not democracy.

Tonight, J-Street is claiming it has 20,000 signatures on its online petition. Sounds impressive? Except that as an unchecked online petition, it’s open to anyone to sign up, Jew or not. The Dearborn Chapter of Hamas Are Us could sign it en masse, provided they all devise email addresses and postcodes. The members of Berkeley Students Against Israel, the USA and Persons of Mosaic Persuasion could all sign it. Perhaps the members of the Palestinian delegation to the United Nations at this very moment are adding their suitably chosen Jewish names and matching email addresses to the J-Street petition. Who knows?

Just to test it out, I invented myself a name, Hephzibah Mouse, and a matching gmail address. I also found an example US zipcode using Google and put it on the petition form. Bingo! I duly got confirmation from the JStreet site congratulating Hephzibah Mouse for letting the world know that Benjamin Netanyahu does not speak for her…. 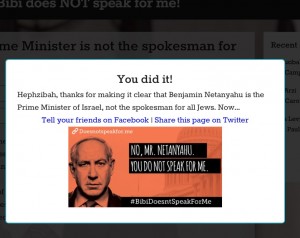