You have seen that Shakeel Begg is plainly an extremist. His very own words, on video, make it as clear as can be. 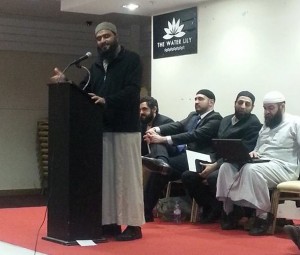 Shakeel Begg speaking at an extremist rally. To the right is fellow speaker Haitham Haddad.

The record of his mosque, the Lewisham Islamic Centre, provides further evidence against him. Evidence that stretches back for years on end, in fact.

For example, only an extremist group would want the notorious hate preacher Haitham Haddad to preach to its followers. Well, this is just what the Lewisham Islamic Centre has done with Haddad. He has been very welcome there.

In one talk at the mosque in 2008, Haddad asks the audience about matters of ijtihad (reasoning or interpretation of Islam) and other matters where there is no room for ijtihad and only one acceptable view.

Can they cite a matter where there is no ijtihad and an unacceptable view?

A member of the audience points out Muslims who say “no jihad”. This is Haddad’s response:

“Ah, saying there is no jihad. Well, if something happens to the masjid (mosque) I am not responsible. You are responsible. Shakeel [Begg] is responsible. [the audience laughs]

So if someone says there is no jihad, at this moment it’s just spiritual jihad, this is not an acceptable opinion whatsoever, OK. Whether they like it, they don’t like it, whether they will take us all to prison, or they don’t, OK, it is up to them. This is the haqq (truth), we follow the haqq, OK, this is part of our deen (religion), yeah?
…
This is recorded, huh? Oh. But we did not say something wrong.”

Later in the talk Haddad turns to hating non-Muslims:

“Out of justice, the kaffir (disbeliever, widely considered highly pejorative), you should have hate for him because of the kufr (disbelief) that he is carrying and you have to have love for him to endorse Islam, to endorse the haqq (truth).
…
We tell them [non-Muslims] the hate in our religion is different from the hate in any other religion. We might hate a person but we love good for him, OK. This is the difference. Is that clear? And therefore brothers you have to be careful. Although you hate a kaffir but you love good for him. You love that he accepts Islam. You love that he becomes a better person, although you hate him. This is difficult, but you have to have this. This is out of justice.”

So if they are just holding this opinion, OK, out of ijtihad, of course this is wrong. If it is motivated by some wrong principles that they have, then there is a problem.”

So there you have it. Stand up for jihad, hate non-Muslims, and kill apostates. This is the Islam of Shakeel Begg’s mosque.