This MP has done more to support palestine than anyone else. PLease support him now
David Ward MP

My name is Jeanette Sunderland, I am the Campaign Team Leader for David Ward MP.

David is constantly attacked by certain sections of the media for his work in support of Palestine and he often receives emails and letters of criticism. Next year he will face a really difficult re-election. I know that third-party organisations from outside our area will be paying for large direct-mail campaigns, costing hundreds of thousands of pounds, all aimed at attacking David and keeping him out of the House of Commons. people and call for the Government to consider if a policy of boycott, divestment and sanctions could play in bringing an end to the long standing conflict between the State of Israel and Palestinians. Now I am asking for you to support him.

Please help me to fight a winning campaign for David and keep a strong voice for Palestine in the House of Commons.here in Bradford East, where three-quarters of people earn less than the national average earnings of £26K, cannot hope to raise enough money without help from people living outside of Bradford East. That is why I am asking for your help.

Please, if you can, support David with a donation to his campaign.

With my very best wishes 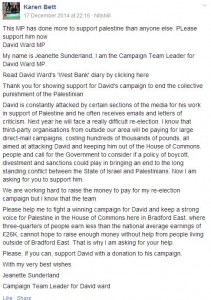 David Ward MP on Twitter takes the occasion of the murder of French Jews to declare his solidarity with Palestine. That’s why you should give him money.