I’ve long been at least as absorbed by what’s going on (politically, economically and socially) inside Iran as I have been in Iran’s potential nuclear weapons capabilities, in the progress (or lack of same) of negotiations on nukes, the regime’s anti-Israel activities, etc.

So I’ve noted some recent reports with particular interest:

–In the queue for bread at a Tehran bakery, customers openly complained to each other about recent price increases.

One woman grumbled: “What they [the government] can’t afford, they take out of our pockets.” A few others followed suit.

But out of the blue, a man in the middle of the queue with a professorial voice said: “Bread prices have not gone up for three years. The government had no choice.” He further explained that the government was subsidising bread, and so it wasn’t a matter of taking money out of anyone’s pocket. An awkward silence ensued.

Sensing the death stares, he casually said to no one in particular: “Aslan beh man che? (What is it to me?) Anytime you say something that’s not entirely against the government, people denounce you as a spy.”

That is: Iranians are now suspected by members of the public of being spies if they publicly defend the government.

While some students supported the speech with the chant, “Death to the seditionists”, at least part of his audience was not convinced and challenged Shariatmadari with chants. The editor tried to mock them by “translating” their signs: “[Billionaire philanthropist] George Soros, we love you! [US political writer] Michael Ledeen, we love you! America, we love you! Israel, we love you!”

The protesters refused to be silenced, shouting, “Interrogator, get lost”; “God willing, get lost and don’t come back”; “Death to the Islam of the Taliban”; “Shame on you, let the university be!”; and “Freedom of thought can’t be achieved with a long beard!”

And then there were the chants for Mir Hossein Mousavi, the leading candidate in the disputed 2009 Presidential election who has been held under strict house arrest, along with his wife Zahra Rahnavard and fellow 2009 candidate Mehdi Karroubi, since February 2011.

Iran has been hit so hard [by the oil price collapse] that its government, looking for ways to fill a widening hole in its budget, is offering young men the option of buying their way out of an obligatory two years of military service.

Potkin Azarmehr, who has contacts in Iran, confirms this report:

Rouhani’s government has been hit hard by the oil price drop. His annual budget was based on sanctions being lifted and oil being at above $100 per barrel and so there is a serious deficit problem.

Buying your conscription has always been an option for expats but now it’s been extended to those inside Iran. So much for the “monotheistic classless society”, which was the slogan of the revolution.

A government that desperate for cash may still be a threat, but– like Putin’s regime in Russia— the huge loss of oil revenue appears to be taking it down a few notches, and maybe more. 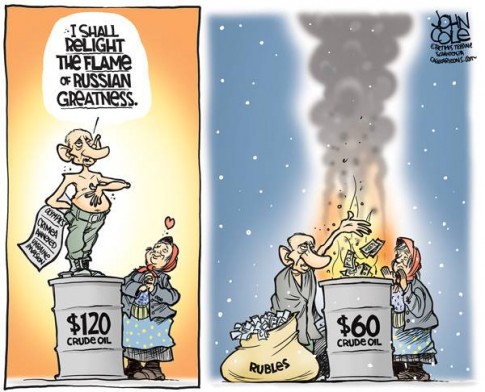