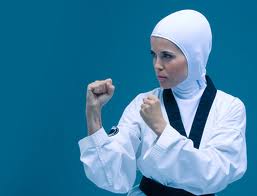 On Monday this week on BBC Asian Network radio, there was a lively and informative discussion between Yasmin Alibhai-Brown and Nihal Arthanayake. It was about Alibhai-Brown’s new book called ‘Refusing the Veil’, in which she argues that the veil, in all its forms (Hijab, Niqab, Burka, etc) should be cast aside by Muslim women as it’s incompatible with feminism and is a symbol of underlying patriarchal oppression. You can hear it here. (It starts at 1:10.30).

Firstly, a disclaimer: I am a white male. This is enough for some to think I should steer clear of this topic. I don’t agree. This is a logical fallacy (a genetic one), and I try to avoid these. If my summary, understanding or proposal are bad, that’s fair criticism. Discounting my view because of my genes is not.

Secondly, I really like Alibhai-Brown and have not found myself disagreeing with her before. A hat-tip is also due to Nihal (I use his first name as this is the name of his regular phone-in show); he really is a very good interviewer and plays Devil’s Advocate well when in a one-on-one discussion. This provides excellent balance to the dialogue and really brings out the nuance of arguments.

Thirdly, I haven’t yet read the book. I form my opinion on the basis of the linked interview. I think it was long and detailed enough to get a broad understanding of the premise of her argument.

This is an emotive subject. This was made clear straight after Nihal announced the topic on Twitter: 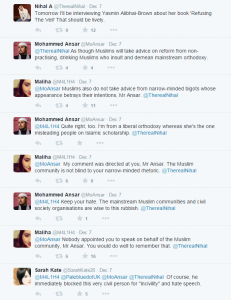 Our favourite Muslim commentator is first in to the fray. It’s clear he doesn’t hold the opinions of Alibhai-Brown in high regard. He accuses her of ‘non-practising’ (a point she covers in the linked interview, where she does consider herself to be a practising Muslim) and ‘drinking’ (again, Alibhai-Brown covers this and confirms she drinks wine).

User @M4L1H4 provides a strongly worded but civil rebuttal to Ansar which he ends up walking away from having considered the replies ‘rude’. Surprising given his initial attack on the very spiritual integrity of Alibhai-Brown.

Ansar should retract his accusation of ‘non-practising’, unless he considers drinking alcohol to be enough to automatically make someone non-practising. If this is true, what else would disqualify one as a practising Muslim?