Many who reject the concept of ‘Islamophobia’ could probably live with the word if it was used as a synonym for anti-Muslim bigotry. Islamophobia Awarneness Month will have done little to persuade the sceptical to feel more comfortable with the term.

Here’s a report from the Islam Channel which brings together Shiplu Miah of MEND (you can read more about them here) and Asif Sadiq, President of the National Association of Muslim Police. Yasmin Khatun begins her report by asking what Islamophobia actually means, and provides the answer: ‘Prejudice, hatred, a fear of Islam’.  This is immediately glossed as ‘racism’, and then (1:04) associated with ‘crime’.  Anti-Muslim crime and abuse is a real problem; it needs to be monitored accurately and its victims supported.  And it’s not always easy to draw an absolutely neat dividing line between ‘Islam’ and ‘Muslims’.  However this report fails to distinguish between legitimate criticism of certain views and practices and genuine bigotry.  Ofsted’s criticisms of some schools on the one hand and criminals who assault Muslim women in the street on the other are both simply examples of ‘anti-Islamic hate’.

Shiplu Miah complains that sometimes the word extremism is used to include ‘the traditional mainstream beliefs and practices of Muslims’ (8:27) which, he goes on to explain, have not led to terrorism. The problem here was that Miah gave no indication which practices and beliefs he meant.  Perhaps he was just referring to halal hysteria – but it is also the case that some Muslims hold extreme positions on apostasy and homosexuality while condemning terrorism.

Looking at the MEND site, we can see other examples of the term ‘Islamophobic’ being used frivolously.  In its post on the recent retraction of Islamic wills guidance by the Law Society, it comments:

It is difficult to determine whether the guidance was revoked under pressure from an Islamophobic lobby or out of genuine regard for the note’s impact on legal professionals.

While it’s true that bigots probably didn’t care for the guidance, neither did many Muslims.

A MEND Islamophobia Awareness event on demonising Muslim youth depicts a Muslim girl with horns.  Alongside the picture is a tendentious Daily Star headline, a report of disgraceful vandalism at a Muslim cemetery – and this assertion: 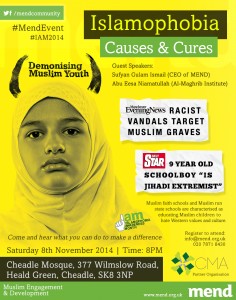 This is not some kind of completely unfounded slur.  It’s rather starkly put, but some of the evidence arising from the ‘Trojan Horse’ investigation would support this allegation.

By smearing secularists and liberals (including many Muslims) as ‘Islamophobes’, and seeming to delegitimise even measured criticisms of anything associated with Islam, organisations such as MEND only feed the fears of genuine bigots.