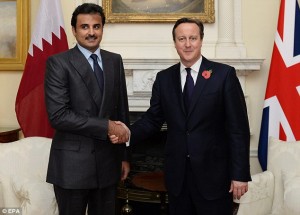 Sheikh Tamim bin Hamad Al Thani, Qatar’s Emir, has visited the UK this week in the hope of fuelling further economic ties between both countries. Among the many issues discussed included measures to help tackle extremist groups including ISIL, as well as other Islamist and Jihadist organisations. Prior to the Emir’s arrival, throughout the week many have called for the Prime Minister to highlight allegations made against Qatar including its links to groups such as ISIL and the Muslim Brotherhood. Additionally, Frances O’Grady, General Secretary of the TUC, wrote an open letter to Cameron, urging him to condemn Qatar for being responsible for slave labour. Despite taking actions aimed at addressing such problems, Qatar’s actions remain in contradiction to its promises to generate meaningful change.

One of the key issues brought up in yesterday’s meeting at 10 Downing Street was the role which both countries should play in tackling ISIL. Earlier this year David Cohen, Under Secretary for Terrorism and Financial Intelligence, argued that Qatar was responsible for funding extremist organisations, including groups in Syria. Since then, numerous allegations have been made against the state of Qatar for being weak in clamping down on the funding of extremist groups and organisations. The Qatari response to such allegations has however been one of denial.

A number of senior Qatari officials denied allegations of Qatar’s involvement in the funding of terrorist organisations, but failed to mention whether they had been lax on measures preventing other Qatari nationals to do so. It is thought that Qatari nationals in Doha are responsible for having links with groups such as the al-Qaeda affiliate, Jabhat al-Nusra. Helping such groups in their campaigns by providing aid through financial means and weapons. Qatari officials have however stated that they support ‘moderate’ groups in Syria with their fight back against Assad. The countries reluctance to take a more aggressive line against the financing of Jihadist groups from within the country itself should lead us to question Qatar’s role as a member of the coalition against ISIL and other terrorists operating in the region. It is likely that Qatar’s membership of the coalition is a matter of expediency, which partially frees them from the charge of being soft on Islamism and Jihadism, as opposed to an act of a genuine fight back against brutal totalitarian groups in Iraq and Syria?

There have been plenty of reasons to believe that this is the case. Qatar’s policy towards the Muslim Brotherhood members recently, smells of doing ‘enough to quell criticism’, but not enough to effectively tackle the problem with conviction. Earlier this year Qatar expelled seven ‘senior’ Muslim Brotherhood members, who had fled to Qatar following the ousting of Mohamed Morsi’s Muslim Brotherhood regime in Egypt in 2013. Although the expulsion of such figures is welcome, the Qatari government failed to expel infamous figures such as Yusuf al-Qaradawi, who is arguably responsible for an immeasurable amount of damage by spreading Islamist ideology and fatwas that demand that all able bodied Muslims rush to Syria to fight Jihad. Much like the Qatari regime, Qaradawi has been guilty of expediency and conflicting statements. In a conversation with a group of Rabbi’s, Qaradawi previously commented that:

“There is no enmity between Muslims and Jews…. Jews who believe in the authentic Torah are very close to Muslims”.

However in contradiction, he has also stated that:

“Throughout history, Allah has imposed upon the [Jews] people who would punish them for their corruption. The last punishment was carried out by Hitler…This was divine punishment for them. Allah willing, the next time will be at the hand of the believers.”

Not only is Qaradawi still living inside Qatar, but was invited as a guest to attend a fundraiser thrown by the state of Qatar. If there were ever a figure whose expulsion was warranted, it would be that of Qaradawi. Qatar’s failure to expel such an individual signals that it is not serious in combating extremist views.

Qatar’s weak response to fighting extremism, whether it be physically through airstrike campaigns in Syria, or through challenging Islamist ideologues such as Qaradawi, it is clear that Qatar’s role in regards to such matters has been dubious and should cause concern. Given Qatar’s relationship with extremism, more should be done to demand the country to carry out actions which would yield greater results.