When an Iranian official expresses concern for the safety and security of Israel, it’s time to count the diplomatic and political silverware– or something.

[Deputy Foreign Minister] Hossein Amir Abdollahian was quoted by Iranian media, in what would be a rare confirmation of Iran-US discussions over Isis, as saying Iran had warned Washington that Israel would be at risk should the US and its allies seek to topple the Syrian president, Bashar al-Assad, while fighting the extremist group.

Iran has backed Assad in Syria’s three-year civil war. The US has called for Assad to resign and rules out co-operating with his government.

That would be the same Bashar al-Assad who aided Hezbollah in its 2006 war against Israel and whose regime is being propped up with the help of Hezbollah fighters. 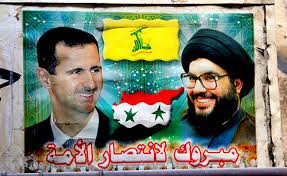 Update: A young Iranian expresses genuine concern and friendship for Israel. He writes:

Believe me, those [Iranians] who demand Israel’s destruction are not the majority, but a handful of associates and mercenaries of the tyrannical and anti-human regime, and they do not represent the Iranian people.

I’m reminded of the brave Iranians who chanted during the 2009 uprising:

“Neither Gaza nor Lebanon, but our life is for Iran”