In a controversial publicity image for Homeland Carrie, played by Claire Danes, looks out at us from a sea of burqa clad women.  Some have claimed that the image is bigoted, even racist.  Claire Danes has been compared to Red Riding Hood, with the other women cast as dangerous wolves. 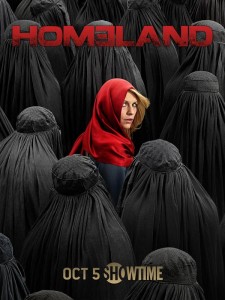 Some, by contrast, see the representation of Muslim women here as patronising, assuming that we are meant to see the women as oppressed, awaiting liberation by the blonde Westerner. For me it didn’t suggest Red Riding Hood, but Offred, the heroine of The Handmaid’s Tale, forced to wear a scarlet habit to denote her position as a concubine in Atwood’s theocratic future America. 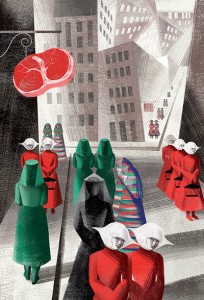 I haven’t seen Homeland, which makes it more difficult to evaluate the debates around this poster, but it might be argued that the veiled women, arranged to exaggerate the uniformity and anonymity the burqa imposes, are being somewhat commodified here.  But it’s possible to find the image a bit glib without in any way welcoming the veil and what it represents.

Zara Faris, writing over at 5Pillarz, and the Homeland poster are oddly close in their treatment of the veil.  Both seem uninterested in the perspective of Muslim women (or women living in Muslim societies) who would prefer not to veil.  Faris begins by citing some examples of colonial figures who have targeted veiled women as a symbol of what is wrong or resistant in Muslim society, and who have sometimes weaponised the position of Muslim women to further military goals. The fact, or assertion, that people in the West have invoked the veil  for cynical purposes proves nothing about the women’s own views on such issues. It is very clear that many women resent being forced to wear even the hijab, let alone the niqab or burqa. (Others, equally clearly, wear it freely.)

Faris states that the veil has been used to stir up ‘fear and distance between Muslims and others’, and refers to various calls for a ban or limitation on the niqab in the UK.  What she doesn’t mention is the great resistance to such illiberal moves from many non-Muslims – MP Phillip Hollobone’s call for a ban gained no traction – or the passionate opposition to the veil articulated by many Muslims, most conspicuously Yasmin Alibhai Brown and Taj Hargey. Faris sneers at supposed liberal hypocrisy and inconsistency, but the Camden school’s decision to ban the niqab (which she objects to) is easily in line with conventional pupil dress codes.  Schools routinely seek to stop children, particularly girls, succumbing to peer pressure. Hence there are restrictions on make up, jewellery, skirt length and so on. To allow the niqab could be seen as granting a comparatively marginal understanding of one religion a quite disproportionate privilege.

I wouldn’t mind so much that Faris grumbles about the niqab being ‘strongly discouraged’ if she had spared in her long post just one thought for the many women who cannot leave the house without covering up.  She sneers at those who have the temerity to mention their ‘discomfort’ around the niqab – I wonder if she stood up for Chris Moos and Abishek Phadnis when they were prevented from wearing garments which made some people feel uncomfortable.

By contrast, her objections to the Australian parliament’s recent steps against veiled women seem reasonable. She is also right to identify something of a liberal conundrum at work in the debates, an issue which has often been discussed below the line here.  At what point does a liberal society have to practice a measure of illiberalism in order to protect its values? Personally I am opposed to bans on the niqab or burqa, but don’t think people should have an automatic right to wear it in all circumstances or contexts, given the many ways in which all our freedoms to dress as we please are in practice restricted – one can’t usually wear a bikini to work.

Faris summarises a few key points. I’ve added my own responses in italics.

“The niqab is both demeaning to men but also imposed by men”, so men imposed the niqab to demean themselves?

The men who are doing the imposing and those who feel insulted are not the same men. There’s no contradiction.

“The niqab makes women invisible”, yet the same people claim women in niqab are being publicly conspicuous, with the sight of women in niqab apparently “intimidating the public”.

The niqab makes women both more anonymous, less easy to read (consider people’s failure to agree on what on earth the women in the Homeland poster might possibly  be thinking) but more conspicuous. There’s no contradiction.

“The niqab is forced on women against their will”, so these women must be forced to remove it?

This is an argument I’ve used myself, but it really is forced on some women, and, while there’s a limit to how much we can legislate for peer pressure, we should at least be aware that some women experience coercion.

“The niqab is a restriction on women’s life choices”, so women should be denied the choice to wear it?

I think it is restrictive, but accept it is also sometimes freely chosen.

“The niqab is a form of sexual objectification”, so Muslim women should be compelled to wear more revealing clothes and “express their sexuality”?

Yes, it is a form of sexual objectification which is why it is reasonable for a school, which already presumably bans more conventionally sexualised dress, to ban it. And there’s plenty of middle ground between the niqab and Page 3.

“The niqab is antisocial”, so let’s ban it and confine these women to their homes?

Again, there’s not really a contradiction here. Yes, it is somewhat antisocial, or can be seen that way. Yes, banning it would restrict the movement of some women. Maybe Faris should worry more about why and how, exactly, a ban would confine women to their homes.

“The niqab inhibits communication”, especially when niqab wearing women communicate to us otherwise.

It takes two, or more, to communicate. If we listen to the niqab wearing women who ‘communicate to us otherwise’ we should also listen to those, for example, who depend on lip reading.

The niqab is a very uniform look.  Women wearing niqab only stand out here because they are in a minority so this isn’t a very logical point. Neither is the next point truly contradictory – some women are forced to wear it; some choose it as a reflection of an unwelcome ideology.

Most men seem able to control themselves perfectly well in the presence of unveiled females, and modest dress doesn’t necessarily protect against sexual harassment. And even if it did – would the conclusion be that women should cover up or men should change their behaviour?

“The niqab is offensive to men because it suggests that men cannot be trusted to control themselves” – yes, in the same way that door locks are offensive to strangers.

It is offensive to suggest that unveiled women are like careless householders who invite burglars in.

“The niqab symbolises an overriding social concern with a woman’s body”; so let’s have a national debate about these women’s bodies.

Muslim women’s bodies do get over-scrutinised and visible Muslim women are vulnerable to attack; however, as already noted, Faris has no interest in women whose lack of hijab attracts insults or worse.

It is actually a mistake to invoke the freedoms of liberalism as grounds to defend the niqab because liberalism does not in fact propose to defend all kinds of personal freedoms. Liberalism actually considers it necessary to force people to exercise different “freedoms” to those they may personally want to. This is not a contradiction within liberalism, but a necessary feature of it.

Not true – many liberals do defend the right to wear the niqab, though they also defend their right to articulate their dislike for the garment.  These voices are among the many silenced and ignored in this post. Nick Cohen and the late Norman Geras, for example, have strongly defended the right to wear the niqab from a liberal perspective.  Conversely, we hear nothing from Faris about those Muslims who relish the prospect of women being forced to cover their faces.

Faris then argues (not very coherently) that liberalism only allows a limited set of freedoms, not ‘real’ freedom, quoting some (not very liberal) pronouncements from Joseph Raz in order  to smear all liberals by association.  ‘Liberalism’, like ‘feminism’ and ‘Islam’, comes in different shades, but in fact allows us many freedoms – to adhere to a restrictive religiously imposed moral code, to leave a religion, or to change religion. I’d be very interested to know exactly what range of freedoms Faris would like to see in her own ideal society. She holds up a ‘pluralistic’ model as an ideal, but what is it in this model which she doesn’t find in the UK, unless perhaps she doesn’t like the fact that people are free not just to follow their religion or culture, but to leave it and persuade others to do likewise, just as Muslims are free to persuade others to follow Islam?