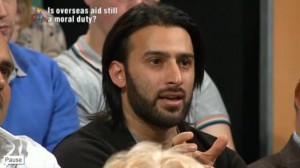 Radio clip can be viewed here

Are you an apostate from Islam, homosexual or just don’t believe in theocratic totalitarian dictatorship?

If so, then there are people in the UK that want you dead. In fact, these individuals don’t just harbour these beliefs privately they broadcast them proudly on BBC radio at a time when hundreds of Brits are joining ISIS. Welcome to Britain in 2014.

Earlier this week on a BBC radio show a discussion on “what should Britain do to returning Jihadists” took place that involved the ever-sensible Haras Rafiq of Quilliam. After discussing motivations some young Brits may have for joining a terrorist group like ISIS, a complete inarticulate buffoon that sounded like he was from the cast of Carry on up the Khyber, decided to ring in and present the standard and repetitive Islamist line on extremism.

after a lot of squirming, and being asked 4 times by presenter Mike Sweeney to answer the question with either a yes or a no, he finally replied – albeit not with a straight yes or no.

“most Muslims, including myself, would desire this”

Adding, we needed to

“study what a caliphate would bring to the world”

Alarmingly he thought theocratic rule was a viable alternative to secular liberal democratic politics but judging by his words it is unlikely he even understood what the words being used meant.

As if the interview itself was not embarrassing enough, the caller, in a shameless self-publicity stunt, posted the interview on his blog. In turns out, this chap (called Majid Iqbul) was not just a random caller after all is actually a Hizb ut Tahrir (HT) acolyte. Readers of this blog don’t need an intro to HT, suffice to say they are theocratic fascists whose stock has been pummelled in recent years due to a number of high-profile defections and a general lack of interest in their repetitive and shallow slogans.

Interestingly, HT activists tend to hide their HT affiliations these days in the knowledge that the brand in toxic. Progress of sorts you may think but it’s worrying that they think they can still purvey their medieval longings by pretending to be random members of the public. Please HT, we are really not that stupid.

However, the Quilliam rep, Haras, was not surprised at all by the evasive tactic. In fact, he let out a good chuckle when the caller began his predictable rant and then put him on the spot with some good questions. The problem with the likes of HT and other assorted Islamists is that when they have a discussion they are not really having a discussion. They only know how to have a monologue, they are talking to themselves and anyone else who will listen. They are certainly not interested in listening to any counter-arguments and, hence, dialogue with them is of limited value.