“If you’re in trouble or hurt or need – go to poor people. They’re the only ones that’ll help – the only ones.”

–Ma Joad, The Grapes of Wrath

In the wake of the Great Recession, the richest Americans are donating less to charity, while the poorest are giving more, according to a new study.

In a report released today, the Chronicle of Philanthropy found that Americans who earned at least $200,000 gave nearly 5% less to charity in 2012 than in 2006.

Higher-income people tend to give proportionately less during tough economic times, says Stacy Palmer, editor of the Chronicle of Philanthropy.

“Lower and middle-income people know people who lost their jobs or are homeless, and they worry that they themselves are a day away from losing their jobs. They’re very sensitive to the needs of other people and recognize that these years have been hard,” Palmer says.

Religiosity is another factor driving up giving among low- and middle-income Americans, she says. 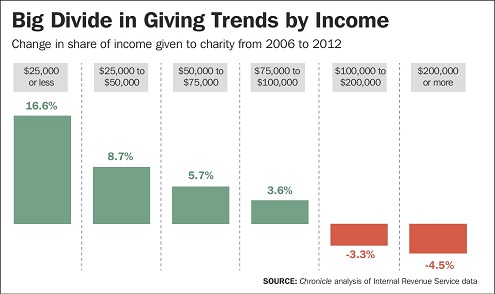