Remember the “terror babies” scare of a few years ago?

According to its advocates, pregnant women were coming to the US as tourists, having babies, and then returning with their newborns to their home countries, where they were raised to become terrorists. Because of a clause in the 14th Amendment to the Constitution, originally enacted after the Civil War to give former slaves citizenship, anyone born in the US is recognized as a US citizen. So after decades of indoctrination, these “terror babies” would return to the US as full citizens to carry out their nefarious deeds.

Among those taking this nonsense seriously were two Texas Republican politicians.

State Representative Debbie Riddle said she got the information from former FBI officials, whom she refused to name, and then got indignant when she was questioned about it. (A retired FBI agent publicly declared it fiction.) Congressman Louie Gohmert reasserted the claim, again with no evidence.

Now another elected Texas Republican– Lieutenant Governor David Dewhurst– has told a conservative audience at a “Values Voter Summit” in Washington that Muslim prayer rugs have been found on the border between Mexico and Texas.

There are two problems with this:

Dewhurst made the mistake of failing to fact-check an item on Breitbart.com.

Matthew Leber spokesman for the American Patriot, Three Percent, sent Breitbart News photos of what American security contractors on the ground believe is a Muslim prayer rug found near the border in Arizona last week.

A member of the security team spoke with Breitbart News on Monday night saying they were on patrol right along the border came down into a wash and the area were working in just south of Sierra Vista in Coronado national forest.

“That’s when I saw this thing laying around. And I was like, ‘What the hell is that?’ We walked over there and I didn’t really want to pull at it not knowing what was on it. I poked a bit at it with a stick and noticed some of the Arabic writing and was just like, ‘Oh boy.’ I snapped a couple of photos and then went on our patrol.”

Here is a photo of what these “security contractors” found: 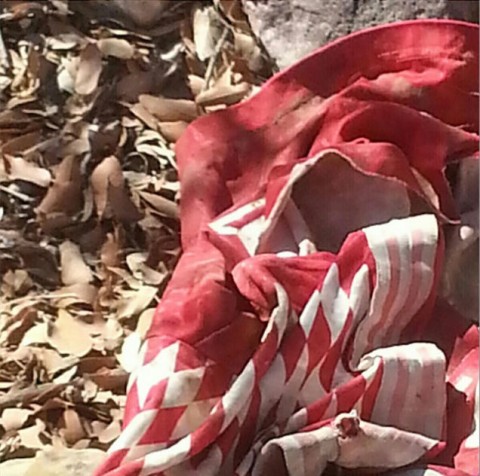 Adam Bernstein of Gawker did a forensic analysis of the photo and concluded that the “prayer rug” is in fact an Adidas soccer jersey– probably like this one.

You don’t need to be an expert to notice that the stitching and design are characteristic of a shirt, not a prayer rug.

I’m sure someone will accuse me of diminishing the danger of Islamic terrorism in the US. I think the people who really diminish it are those who raise alarms over the most ridiculous things, thus making it harder to discern the genuine threats.

Texas state Sen. Charles Perry (R) on Tuesday compared the lack of religious influence in U.S. government to the Holocaust during a speech at his swearing-in ceremony.

“There were 10,000 people that were paraded into a medical office under the guise of a physical. As they stood with their back against the wall, they were executed with a bullet through the throat. Before they left, 10,000 people met their fate that way,” he said, recalling a recent trip to a former German concentration camp, according to the Lubbock Avalanche-Journal.

“Is it not the same than when our government continues to perpetuate laws that lead citizens away from God?” Perry then asked.

Without knowing which laws he is talking about, I’m going to go out on a limb and say “No.”