In response to unrest and separatism, including acts of terrorism, China has imposed collective punishments on Muslims living in Xinjiang.  Restrictions have been imposed on Islamic dress, including hijab and beards – in the city of Karamay anyone wearing such items has been banned from using the bus service.

The prohibitions on Islamic attire and beards have attracted widespread criticism, with many experts saying such repression angers ordinary Uighurs and risks radicalizing them.

Students and civil servants have been banned from fasting during Ramadan.

In a contrasting move of apparent conciliation, an animated series has been devised which celebrates a legendary Uighur princess, Princess Fragrant, and celebrates peaceful co-existence between China’s different ethnicities. 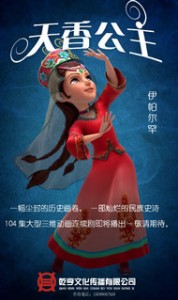 The trailer also has a scene of the princess dancing for guests at a banquet, which is in line with the popular depiction of ethnic minorities by the Communist Party. Propaganda posters, publications and television shows across China often portray members of the country’s 55 ethnic minorities as smiling folk dancers in colorful native garb.

However many see this as propaganda which papers over the true history and culture of the region. Another rather dubious method of trying to engineer co-existence is the policy of offering cash rewards when Uighurs intermarry with Han Chinese.

Although some Uighurs have indeed been radicalised by extremist preachers, the latest high profile victim of the government’s crackdown on separatists is a moderate. Ilham Tohti is a critic of the government, but does not share the separatist aspirations of some of his fellow Uyghurs, let alone the violent methods favoured by some.

“I am innocent,” Tohti said, according to a tweet by Liu Xiaoyuan, one of his two defence attorneys. “I have never organised a separatist criminal group, and I have never engaged in criminal activities intended to split the country.” Tohti has claimed that he spent his career attempting to foster an honest dialogue between Han and Uighurs, rather than advocate Uighur independence.

Now Tohti has been sentenced to life in prison.

Ms. Wang [Maya Wang from Human Rights Watch]noted that the indictment of Mr. Tohti was consistent with a broad move in recent years by the Communist Party to silence advocates known for their “measured words and actions,” including Xu Zhiyong and Pu Zhiqiang, two well-known lawyers arrested for their political activities.

“These and Tohti’s harsh sentence are signs of just how far the authorities have gone in severely restricting the already limited civil liberties in China,” she said, “and that the situation might get even worse down the road.”

Here’s a press release on the sentence from Amnesty International.

When dealing with terrorist threats there is always a danger that some methods or policies will further alienate or radicalise a group. Sometimes such steps are – or seem – necessary and justifiable despite this risk. But China seems to be imposing completely unnecessary and illiberal restrictions and punishments against people and  practices which have no clear terrorist association and are not necessarily even associated with peaceful separatist aspirations.