So here it is, a rainy Edinburgh and Scotland is still part of the Union. I can’t tell you how relieved I am.

Here are a couple of pictures for you – from the flat upstairs:- 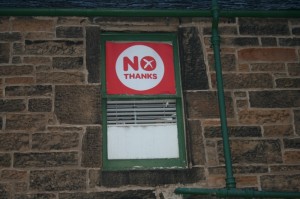 I would have put one up myself but I’m on the ground floor, right next to the pavement and had new windows installed back in April.

Here’s a billboard opposite my bus-stop:- 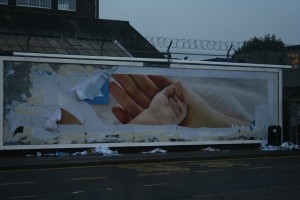 I can’t say how relieved I am. As my last post said, this has been a nightmarish time, that through a nationalistic army that recruited many of those angry with Westminster, it looked as if we could be pushed out of the Union.

A couple of anecdotes. I went to the polling station, which is about fifty yards away, at just past seven yesterday morning. There were about a dozen people there. That’s unheard of in my voting experience. I made my cross quickly but other people were in the booth for quite some time.

I wonder how many other people went through that same process? Because the Yessers did capture the patriotic train and the anger at the political class at Westminster, and were heading to independence, and those who did not want to get on had to protest, listen I am a proud Scot, but I still can be that and be British too. That declaration had to be made over and over.

We’ve been forced into one kind of nationalism or another. I don’t mind flag waving at sports events or celebrations like a royal wedding but I hate it for political purposes, and I found myself at a couple of rallies for the No side, where the union flags and umbrellas were waved along with the Scottish standard and the Saltire. One of the complaints of the No side was that the Yessers had captured the cross of St Andrew, as far right England captured the Cross of St George, spoiling it for them..

The No campaign has lacked lustre, and at last Sunday’s rally those who turned out said they were glad to be doing something, as they watched with horror the opinion polls swing towards the Yessers. That may explain the high turn out as well – folk saw we were heading for a cliff and came out to stop it. 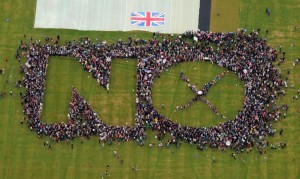 Attachment to the Union is an unemphatic thing here. Only Protestant loyalists, a scary bunch, go about waving union flags. The time I’ve seen those flags most in evidence was in Northern Ireland in the early eighties – and how frightening were they, in everyone’s front gardens. But when their place in the Union was threatened, people didn’t like it and turned out to vote against it. And for their jobs, their mortgages, their pensions and stability.

Anyway, it has been an emotional time. I found myself saying to my colleagues, who had swithered to Yes but finally decided it was sensible to vote No, I love Scotland, I love the Scottish people. Dearie me!

The neverendum will by analysed for a long time to come. So in the meantime, to the people round here – Sarah AB, Lamia, Kolya and even some of you miserable gits who said, if Scotland secedes, who cares, can I say, how glad that we are still fellow citizens in this ramshackle Union.