Last night the BBC carried a major debate on the referendum from Glasgow – with the audience specifically Scotland’s youngest voters. Both ‘Yes’ and ‘No’ were allowed to nominate two people for the debate.

The SNP and Green party represented the Yes campaign. The ‘No’ ( Better Together) chose the leader of the Scottish Conservative Party and incredibly George Galloway leader of the tiny far-left Respect Party. Just let that sink in for a minute. To defend the union – they chose not a representative of the Labour Party or the Liberal Democrats but a man who has shown nothing but contempt for the British state they seek to maintain.

Galloway, as we know, publicly praised Saddam Hussein, supported attacks on British troops by Iraqi ‘insurgents’, handed over cash to Hamas terrorists, had a paid television show on the Iranian state-owned propaganda channel ‘Press TV’ and recently called for his English constituency of Bradford to be an ‘Israel Free Zone’.

What on earth were Better Together thinking of? Do they think Scottish youth considering voting for independence just needed a bit of populist-left-British nationalism from a grandstanding orator to dissuade them? Why on earth was the Scottish Labour Party willing to have Galloway claiming he was there to speak for ‘real Labour’?

I was expecting Galloway to produce some old school Stalinist stuff about nationalism being a diversion from the ‘real struggle’ etc – instead he decided to outflank the Tory from the right. He taunted the ‘Yes’ campaign by saying that if Scotland voted yes the bankers would flee Scotland, attacked their ‘fantasy economics’ without any indication there was some progressive solution in Westminster and suggested that even having a referendum was already damaging to the Scottish economy because of the stock market fluctuations.

The audience didn’t appear impressed but the show ended in utter embarrassment as Galloway inexplicably chose to attack the ‘Yes campaign’ by drifting into WW2 patriotism, declaring that if it wasn’t for the union “we’d be having this debate in German” now. The audience of teenagers (whose contributions were far above the standard of the average Question Time crowd) had finally had enough and the debate ended with Galloway being roundly jeered and booed.

All good fun for those who like to see Galloway get the treatment he deserves but what on earth were Better Together thinking of choosing Galloway? What on earth were Scottish Labour thinking of? Thanks to their choice the debate was between a progressive left-wing Green and a progressive left-of-centre SNP leader on one side and a Tory and a Stalinist nutcase on the other.

It was such a bad move for the unionists that looking at this image below, you would almost be tempted for thinking that it was an act of sabotage….. 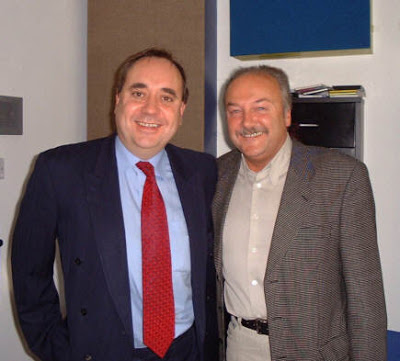