This is a cross-post from Student Rights

In July Student Rights reported on efforts by the neo-Nazi group National Action to target several London universities with posters.

At the time we wrote that institutions should be concerned about the group’s efforts to target campuses, and that further activity was likely.

We have now uncovered a photograph which shows up to 14 members of the group appearing on campus at the University of Leeds. 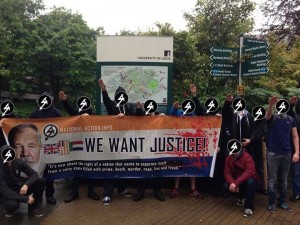 A number of those present are making Nazi salutes and holding a banner featuring EugeneTerreblanche, the white supremacist South African paramilitary leader murdered in 2010.

While National Action claims to have carried out poster drops at universities around the UK, this is the first significant on-campus appearance since members targeted an event at the University of Warwick in January 2014.

A racist organisation which has declared “to be British you have to be white”, National Action regularly shares Nazi imagery and Holocaust denial online.

Members claim “there is no legitimate reason to not be a racist or an anti-Semite in 2014” and promote anti-Semitic conspiracy theory, claiming “the entire civil service is in the hands of the Zionists” and “the Zionists have taken control of the country”.

They also state that the Greek fascist party Golden Dawn “are a perfect example of what we’d like to replicate”, quote Adolf Hitler, and produce racist posters targeting immigrants.

While the far-right has traditionally found it difficult to gain a foothold on campuses it is important that this does not lead to complacency amongst university staff.

An interview with National Action in Aprildeclared it was seeking to create a “reign of terror” on campuses throughout the 2014-15 academic year, and threats like this should be taken seriously.

As such, we hope that students will report any evidence of this group operating on their campus to their universities immediately – and will get in touch with Student Rights if they have any concerns.