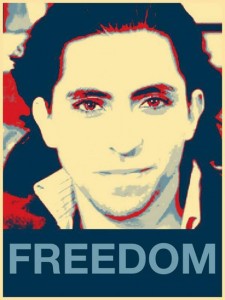 Following an unsuccessful appeal, the Saudi activist faces 1000 lashes (to be administered at intervals) as well as ten years in prison for ‘insulting Islam’.  He helped set up the Saudi Arabian Liberals website back in 2006, a forum in which ideas (including religion) might be discussed freely. He had initially been charged with apostasy – in fact he is a Muslim, but supports religious freedom. The co-founder of Saudi Arabian Liberals, Suad al-Shamari, has decried the injustice of his punishment.

‘Even the worst terrorists have not received such a harsh sentence,” Shamari said.

“Saudi Arabia is putting together all its efforts to fight terrorism… and finally waking up to the mistakes it has created with its own hands” by following a strict interpretation of Islamic law, she added.

Elham Manea describes how this news has quashed her hopes that Saudi reformists were beginning to make a little progress.

And yet I thought that the current developments in the MENA region and the rise of ISIS — which applies Wahhabi religious dogmas combined with Jihadist ideology of political Islam — are enough wake up calls to get the stagnated Kingdom out of its paralyzed modus. I thought perhaps the reform wing would slowly have the upper hand. After all, the whole world would benefit when the kingdom stop mainstreaming ISIS ideology.

But I was wrong.

The kingdom is stuck with itself; unable to move; unable to reform. Stagnated and paralyzed.

You can read the rest of her post here.