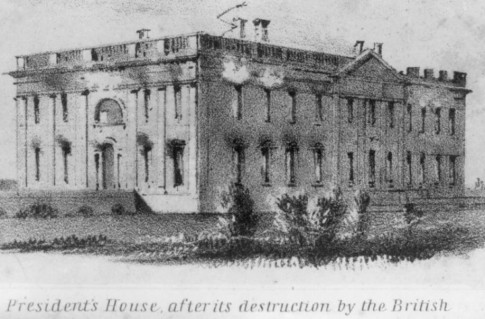 On August 24, 1814, during the War of 1812, British forces entered an undefended Washington, DC, and set fire to the White House, sending President and Mrs. Madison fleeing.

The British also burned the Treasury building, and the building housing the War and State departments. They ransacked the National Intelligencer newspaper office, with [Adm. George] Cockburn ordering the seizure of all the letter C’s from the presses so that the editor could no longer write nasty things about him. The Americans themselves burned the Navy Yard to keep the ships and stores out of British hands.

George Cockburn was an ancestor of the late Stalinoid antisemite Alexander Cockburn– though I don’t think there are any conclusions necessarily to be drawn from this.

The invaders spared private dwellings. This was to be a civilized sacking; no rapes, no murders, minimal plundering. They even spared the Patent Office after being persuaded that patents were private property.

Then they politely left.

The war officially ended with the Treaty of Ghent in December of 1814, but word hadn’t reached General Andrew Jackson when his forces “fought [and beat] the bloody British in the town of New Orleans” the following month.