ISIS has tried to send a warning to the U.S. in about the most horrifying manner imaginable — by broadcasting the execution of an American citizen captured in Syria more than 600 days ago.

The video purports to show the execution of photojournalist James Foley.

The four-minute video opens with a clip of President Barack Obama authorizing U.S. airstrikes in Iraq. After this intro, a title screen appears with the words “a message to America,” followed by an American citizen they identify as James Foley saying that U.S. leaders are his “real killers.” Foley is apparently executed moments later by a man in a black robe — an apparent native English speaker who talks with a British accent — holding a knife.

In better news, Kurdish ground forces in Iraq, backed by Iraqi troops and US airstrikes, recaptured the vital Mosul dam from ISIS. May it be the first of many defeats for the Islamic State barbarians until they are wiped out. 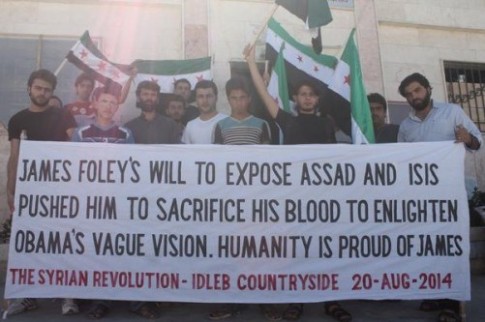 And according to EA WorldView:

The [Syrian opposition] Supreme Military Council has confirmed Tuesday’s EA report that hundreds of fighters from Liwa al-Tawhid, the brigade prominent for its fight in Aleppo city against the regime, have left the Islamic Front and joined the Free Syrian Army.

The Liwa al-Tawhid fighters are among 800 who have bolstered a “unified moderate force” to hold the line in northern Aleppo Province, notably the key town of Marea, against the advance of the Islamic State.

Although Liwa al-Tawhid is still formally part of the Islamic Front, the move of its fighters means it is part of the insurgency’s Operations Room for the first time.