This is a cross-post from anonymous mugwump

In the last week, I have had two interactions with people who have insufficient regard for the empirical literature. By this, I do not mean that we have disagreements about what the academic literature actually says, rather I mean people who have taken the position that the empirical literature is unworthy of our time, all it does is ‘validate [our] sense of the real.’ These views are not really worthy of being directly addressed at a time when there are so many vital discussions to be had. As I’m working on my Iraq posts, I thought I’d just write this quick post in the style of Ben Southwood.

Ben Southwood is the opposite of the aforementioned unempirical individuals, his tweets are based on studies, his posts are jam-packed with references and he is far from someone who would reject data driven research. He often writes posts summarising interesting new research. That’s my aim here – but my summaries will be somewhat longer. Obviously I think these studies deserve a far wider audience but a subtle point is to show what people miss when they disregard the empirical literature.


Counter-insurgency doctrine (COIN) has been described as part of the ‘new orthodoxy’. The basic idea of COIN is to win the hearts and minds of a population so we can defeat an insurgent group. The way hearts and minds are won, the doctrine tells us, is by creating safe spaces and (mostly) economic development. General Stanley McChrystal went as far as to say that ‘95 per cent of the effort should be dedicated to winning popular support and 5 per cent to defeating the insurgents themselves.’ I have advocated COIN-levels of troops, military action and working with local groups to defeat insurgents but a major element of COIN – the idea that we need to win hearts and minds to defeat insurgents – can seriously be challenged on the basis of two new studies.

1. ‘Just How Important Are ‘Hearts and Minds’ Anyway? Counterinsurgency Goes to the Polls’, Raphael S Cohen, Journal of Strategic Studies (2014). Cohen’s main finding is that winning hearts and minds is an effect of military success, not a cause of it. The study looks through three examples of COIN in action: Vietnam, Iraq and Afghanistan. The reason COIN has got things wrong is that it relies on a model whereby the majority of people are undecided and can be won over. This is a fair representation of what COIN expects: 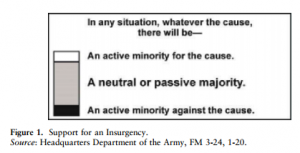 The truth is that in these combat zones, the idea the native population is remotely amenable to terrorist organisation isn’t that well supported at all. Cohen tries to measure the percentage of the population that does actually change their minds and finds that it’s actually only around a third. Indeed, this seems to be overstating the extent to which a population allow their hearts and minds to be changed:

The Afghan data showed less variation: beliefs about how the national government was carrying out its responsibilities varies 13 per cent in six Asia Foundation polls between 2007 and 2012…. Similarly, Iraqi attitudes towards their local leadership changed by 11 per in seven polls conducted between 2003 and 2009… When the ABC News et al. polls asked Afghans to assess the level for support for the Taliban in their area, responses varied by only 6 per cent, while the Taliban’s favourability… In Iraq, different organizations asked about whether insurgent attacks on Coalition forces could be justified, a tacit measure for pro-insurgent sympathies… results varied only by 21 per cent over eight surveys from 2003 to 2008 (p.11-12)

These data obviously have the disadvantage that they tell us who did change their views rather than who could – but it nonetheless is a fairly persuasive measure of how small the undecided people really are. Whats more important though is when these views are changed. The data is fairly clear from all three theatres that views changeafter military success. Thus when we look at when the military gains of the Surge, it was only after that we saw a change in attitudes toward central government and U.S forces. As Cohen notes, attitudes to Iraqi institutions were largely unchanged until 2009 (obviously long after the military effects of the Surge). The most interesting example comes from Anbar:

In fact, Anbar did not cross the 50 per cent threshold until the October 2007 poll, after the number of incidents had declined by over 90 per cent. After that point, between 60 per cent and 80 per cent of Anbaris believed that their neighborhoods were secure. This sense of security, however, did not immediately translate into support for the Iraqi government [it took until October 2008]… Ultimately, Anbar shows an important progression: first, the insurgency is defeated, then the population feels secure and then only then, can the counterinsurgent win ‘hearts and minds’.

Cohen goes on to show how intelligence is not necessarily any better when the populations hearts and minds are with coalition forces. This is one of the mechanisms that is used to explain why the whole idea is important but, once again, it’s not really borne out by the data. Tips off increases and showed no relationship with polling on support for Iraqi institutions or U.S forces. The same trend is found in tip offs given in Afghanistan, look at the trends for support for U.S actions (a majority throughout the period but still declining) against tip offs received:

Finally, Cohen shows that hearts and minds are a poor predictor of stability. In Afghanistan, the U.S has enjoyed broad support for its actions but violence still rages. In Iraq, the U.S did not have support for its actions but there was a success despite that lack of support. Indeed, as shown above, the best way to get the change in hearts and minds was to win militarily. One of the disappointing things about the study is its failure to elaborate on the idea that militants do not require local support to operate successfully. Cohen does note that ‘insurgencies can survive with minimal popular support’ – but thats it. I have written a post called ‘Al Qaeda vs. The People’ which touches on this:

It is undeniable that support for Al Qaeda is dropping – advocating a Taliban-style authoritarian rule whole killing scores of civilians does that – but in terms of operational capability that does not mean there is a significant decrease in their force. Bruce Hoffman makes the point that Red Army Faction had almost zero public support and yet managed to inflict serious damage for almost three decades. The same applies to Al Qaeda; Peter Bergen goes even further saying that “Al Qaeda values one recruit more than a thousand supporters.”

This study has direct relevant for what is going on in Iraq today. I don’t think it’s a stretch to suggest that it’s become part of the conventional wisdom to state that Maliki’s policies have alienated the Sunni population so as to contribute to ISIS gains. In an otherwise brilliant article, here is what Marc Lynch wrote in the Washington Post:


The Islamic State recovered steam inside of Iraq as part of a broad Sunni insurgency driven by Prime Minister Nouri al-Maliki’s bloody, ham-fisted crackdowns in Hawija and Fallujah, and more broadly because of the disaffection of key Sunni actors over Maliki’s sectarian authoritarianism.

I have argued against this view before and will do so again in a lot more detail in Part 4 of Iraq post series – but for now it’s worth repeating exactly what the study says: the hearts and minds of a population do not impede military success. If Maliki was able to win, it would likely be followed by support from Sunnis (leaving aside that the Anbar sheikhs are still committed to fighting ISIS). The study essentially supports the idea that this is a military problem. If the argument is that the oppression Sunnis suffered has driven them to ISIS, I have debunked that several times before. Thats not to deny that Maliki has acted in a sectarian manner – but it is to deny that ISIS gains are anything to do with discontent.