As already flagged in the comments, last night’s disturbing proposed demonstration outside a synagogue in Cambridge was cancelled following outrage from many.

Michael Cahn, one of the organisers, initially posted the invitation to the Cambridge Palestine Forum’s Facebook page.

It read: “Cambridge residents concerned about the recent violence in Gaza are invited to join a Silent Gaza Protest.

“We are meeting in the vicinity of the synagogue in order to encourage the local congregation to take a stance on the actions of the Israel military.

“This is a silent event. Only silence can adequately express our outrage and shame about what has happened. Our visible silence points to guilt, forgiving and forgetting.”

The event would have taken place as the Shabbat or Jewish holy day started that evening.

Janet Walker, one of the organisers, said: “Michael has agreed to cancel the vigil – it wasn’t meant to be a protest really – more of an encouragement to engage in discussion.

The comments under the story demonstrate a rare convergence of Zionist and anti-Zionist opinion – everyone seems agreed this was an utterly offensive idea.

Today’s demonstration in Market Square was a low key affair. 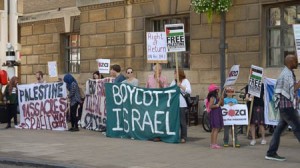 This was the low point. 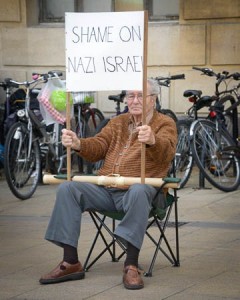 It’s worrying when antisemitism isn’t challenged on demonstrations, as Daniel Randall explained in his recent post on Engage.

I don’t know how easy a ride the man and his placard had on the demonstration before myself and others confronted him. Had official stewards of the march seen the placard, and challenged him? Perhaps he’d spent all day under attack from other demonstrators; I hope so. But when I found him, he was perfectly at his ease, and, as it turned out, surrounded by friends. That is a disappointment. If people with such politics want to attend solidarity demonstrations to peddle them, they should find themselves isolated, and face constant harangue. They shouldn’t be entitled to a moment’s peace.

However (although I still saw and heard plenty to disagree with from the more official protestors)on this occasion the Cambridge demonstration’s organisers had in fact apparently called the police to talk to the ‘Zionazi’ protestor, and made it clear that they distanced themselves from his sentiments.