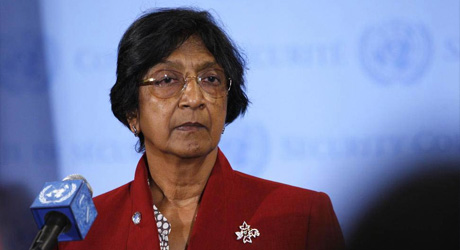 The United Nations is a farce. If it weren’t enough that some of the world’s worst regimes have sat on the Human Rights committee, now you have this. Clearly UN High Commissioner for Human Rights Navi Pillay is an imbecile. This woman might be too stupid to be trusted to run a cash register at a supermarket, yet somehow has been given a high visibility and leading role at the UN.  I know this is a terribly nasty thing to say, but who – other than a utter moron – could come out with the following?

According to Reuters, Ms Pillay has said:

“They [The USA] have not only provided the heavy weaponry which is now being used by Israel in Gaza but they’ve also provided almost $1 billion in providing the ‘Iron Domes’ to protect the Israelis from rocket attacks,” she said. “But no such protection has been provided to Gazans against the shelling.”

That’s right folks, this dunderhead thinks that the United States was wrong to help Israel develop the ‘Iron Dome’ system to defend against Hamas’s attempts to recreate the scenes I posted about yesterday. But worse, she appears to think that the system should have been shared with Hamas!

Now, never mind the fact that if Hamas were not sending scores of rockets over the border into Israel on a near-daily basis, creeping ever closer to Tel Aviv an other large urban centres, there would be no fighting in Gaza, but does she really think that if Hamas had its hands on Iron Dome technology their first priority wouldn’t be to reverse-engineer it so they could find a way to circumnavigate Israel’s defences?