Much too much ink has been spilt on the odious and intentionally provocative statement tweeted by the Liberal Democrat MP David Ward. A tweet where he envisioned himself in some twisted alternative life, shooting rockets at innocent civilians; conveniently posted on the day Parliament ended for recess.

Browsing through his most recent images on his Twitter profile, it was something else though that cried out for more attention. It was almost too predictable a photo op: David Ward posing with members of the ultra-Orthodox Neturei Karta sect. 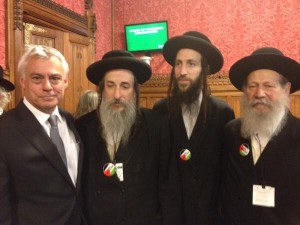 I can’t claim to be surprised and in fact my past conversations on this conflict ultimately ended when my interlocutor called on the Neturei Karta as the golden flush trumping all else. “Even Jews oppose what I believe”, they clamour, demanding that I change my tune and start behaving like a ‘Good’ Jew. This trump card is flashed so often you can almost suspect the player is gaming the system.

However, this phenomenon needs to be closer examined. Professor Menachem Friedman, an expert on the ultra-Orthodox at Bar Ilan University claims that Neturei Karta is a very small group in Israel.[1] He estimates their numbers in the range of 200-300.[2] While they are indeed an extremely small group, marginalised as well as ostracised within the ultra-Hassidic community, that in itself is not reason enough to fully cast them aside. Their closest ideological cousins, the Satmar movement, have been ruffled by its radical behaviour and were actually driven to publish a column to that effect in its most widely read Yiddish-language newspaper – Der Blutt.

The philosophy of the movement is inherently built on opposition to the existence of the State of Israel in any form, from a religious foundation. They come not from the uber left wing or anti-nationalist camp. They are not driven by lofty principles of denying any state an ethnic identity. Thus their alignment to the anti-Zionist movement is not based on shared values but one of mutual benefit, although I suspect one side is getting the better end of the deal. Here again, although their values are rooted in extreme religious dogma, that in itself is not a reason they should be fully marginalised.

But alas, there is something more sinister at play.

In 2006, Iran hosted the “International Conference to Review the Global Vision of the Holocaust,” a conference attracting infamous holocaust deniers. These included David Duke, former Ku Klux Klan (KKK) Grand Wizard, Michèle Renouf, prevented from addressing a BNP event because they were concerned ‘her presence would put the BNP in a bad light’, and Ahmed Rsami, jailed six months in Sweden for hate speech. The conference attracted strong criticism from UN`s Kofi Annan, Ban Ki-moon, as well as many country leaders horrified by the conference’s premise.

The conference did have one unique prize for its far-right and far-left conspiracy hungry audience. The ultimate golden catch. The event was graced by Neturei Karta key UK figure, Rabbi Aharon Cohen. A Rabbi, no less!

Rabbi Cohen doesn’t have a particular affinity exclusively for  far left neo-Nazis. In 2012, as recounted by Gerry Gable, editor of anti-fascist group Searchlight, Rabbi Cohen was a guest speaker at an event run by “The New Right”, a fascist group led by Troy Southgate, an ex-National Front activist. 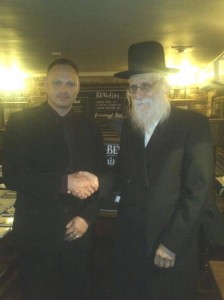 Just so there is little ambiguity, Rabbi Cohen laid out his most abhorrent thoughts on the Holocaust [with the following]: “There is no question that there was a Holocaust and gas chambers. There are too many eyewitnesses.

“However, our approach is that when one suffers, the one who perpetrates the suffering is obviously guilty but he will never succeed if the victim did not deserve it in one way or another.”

“We have to look within to improve and try to better ourselves and remove those characteristics or actions that may have been the cause of the success of the Holocaust.” [3]

Because of such despicable sentiments, he was banned from speaking at Wolfson College, Oxford.[4]

Another spokesperson, Rabbi Yisroel Dovid Weiss captured the headlines when he travelled to France in order to lay flowers at the sickbed of Yasser Arafat. He shared the following on Sheikh Ahmed Yassin, founder of Hamas: “And so we are reminded of one of the exceptional attributes of Sheikh Ahmad Yassin. How he constantly drew a clear distinction between true Judaism and Zionism and between the practitioners of Judaism and Zionist perpetrators” [5].

Befittingly, he was a guest speaker at Nation of Islam’s (NOI) annual convention in 2000 [6]. The founder of NOI, Louis Farrakhan, had this to say of Jews, “And don’t you forget, when it’s God who puts you in the ovens, it’s forever!” [7] Not to be outdone, Rabbi Weiss elaborated in Wardesque manner during an interview, that he ‘understands’ needs for direct violence against innocent citizens of Israel [8].

Get the picture yet?

Rabbi Yisroel Hersh, leader of the Israel branch delivered this gem during an interview with Journalist Larry Dafner in 2006. When asked if he would like to talk things over with Osama bin Laden: “It’s hard for me to say what his intentions are, but certainly, yes, I’d like to explain our views to him, and I believe that if I could talk to him, I could make him understand.” [9] He continued elaborating on his belief that Anti-Semitism does not exist today but all apparent forms, including Neo-Nazism and the KKK are “Influenced only by the Zionists’ crimes, not because of hatred of the Jews”.

London-based spokesperson Rabbi Yosef Goldstein, testified in defence of Abu Hamza al-Masri, who was ultimately sentenced to seven years in prison for inciting his congregation to murder non-Muslims. During the trial, Masri testified that Jews were “blasphemous, treacherous and dirty” and were the reason “why Hitler was sent into the world.” Goldstein, taking the stand on Masri’s behalf, testified to their “friendly and cordial relationship.” [10]

They have fully strained from the once close relationship with the Israeli Edah HaChareidis community umbrella organization, after marching with Hezbollah in Lebanon during the annual “Global March to Jerusalem.”[11] They were deemed too extreme for the Edah HaChareidis movement, themselves raising international fervour two years back, when Edah HaChareidis members from Beit Shemesh hit the news after bullying 8 year old Naama Margolese for her lack of ‘modesty’. [12] Hardly the circle of saints!

Earlier this year, Yitzhak Bergel – a Neturei Karta member – was convicted to four-and-a-half-years jail in Israel after offering to spy for Iran. He told the Iranian officials that he denies the existence of the State of Israel. He also explained to the officials that he was not interested in asylum, and was “willing to murder a Zionist.” [13] After the 2008 Mumbai massacre where six Jews were murdered in a Jewish community centre, they distributed leaflets declaring the attack a form of divine punishment for the organization’s ‘collaboration’ with the Zionists.[14] In January 2014, they were out in force aligning themselves with the fascist, Neo-Nazi Hungarian Jobbik party in London.[15]

The list is endless but fascist, racist and nihilistic groups from both ends of the political spectrum have called on the Neturei Karta movement for the token Jewish support. From Hamas and the Muslim Brotherhood to Islamic Jihad and Hezbollah. Version 2.0 of “I can’t be racist, I’ve got many Jewish friends,” if you will.

Absorbing all of above, lends a damning picture of what the Neturei Karta movement actually stands for. Posting images in support of this group to sanitise ones reputation will, at the very least, throw a damning marker on how little an understanding one carries, of the global Jewish community.

Next time someone does indeed throw this card on the deck, know of whom they are calling upon. 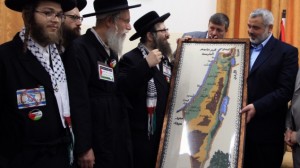