1.      Have you or any of your colleagues been intimidated by Hamas?

3.       How do you feel about the Spanish journalist who said Hamas would kill any journalist if they filmed rocket fire?

4.       Has Hamas pressured you to delete anything you have published?

5.       Has Hamas ever threatened to take your phone, laptop or camera?

6.       Has Hamas ever taken the phone, laptop or camera of a colleague in Gaza?

9.       Are you scared to publish photos of Hamas operatives on your Twitter page, or broadcast images of Hamas fighting and aggression on your news channel?

10.   Have you published any photos of terrorists launching rockets in Gaza? If so, are these images being turned down by your newspaper or broadcaster?

11.   Have you thought of interviewing the traumatised residents of southern Israel?

13.   When Hamas Health Ministry statistics contradict Hamas’ own propaganda and reveal that mostly men of fighting age have died so far in Gaza, does it give you pause for thought?

14.   Is an underage armed terrorist still counted as a terrorist or a child when killed? Or both? Do you explain to your readers how this is possible?

15.   Have you put to Hamas spokespersons that firing rockets from civilian areas in a war situation will draw return fire and lead to the death of civilians?

16.   Nick Casey of the Wall Street Journal tweeted: “you have to wonder with the shelling, how patients at Shifa hospital feel as Hamas uses it as a safe place to see media.” Never mind wondering; did you ask any patients how they feel? 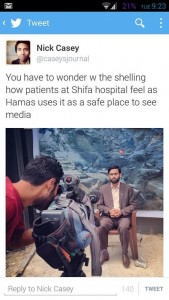 17.   And how do you feel about the fact that Casey subsequently deleted his tweet?

18.   Russia Today journalist Harry Fear mentioned rocket-launching sites near his hotel. Have you noticed any terrorists or terror bases near your hotel?

19.   How do you feel about Fear’s expulsion from Gaza, for tweeting about the rocket launches from civilian areas? Are you worried that you might also be expelled from Gaza?

20.   Did you see any Hamas terror personnel inside Al-Shifa hospital?

21.   Have you interviewed a Hamas spokesperson inside Al-Shifa?

22.   Have you seen any rocket-launching sites in or around the vicinity of a hospital?

23.   Have you interviewed hospital staff or patients as to how they feel about their buildings being used for terror activity?

24.   Hamas’ command and control bunker is underneath Al Shifa hospital. Is this worth reporting? Have you asked to gain access to it, so you can interview Hamas commanders?

25.  French newspaper Liberation reported that Hamas’ Al Qassam offices are next to the emergency room at Shifa hospital, before deleting the article. Was the reporter right to delete the article, and will the information appear in the media at some point still?

26.   When the missile hit Al-Shati hospital where children were killed, did you see Hamas operatives collecting the debris of the fallen Palestinian rocket, as Gabriel Barbati reported? Did Barbati pick up on something you missed?

28.   Can live journalism by reporters who are scared of retaliation from the authorities they are reporting about really count as pure journalism, or is journalism in that context fundamentally compromised?

29.   Have you seen or heard evidence of Hamas using civilians as human shields, by forcing or “encouraging” them to stay inside or enter into a building that has received a knock on the roof?

30.   Have you seen or heard evidence of Hamas storing weapons inside schools, houses, flats, mosques or hospitals?

31.   Have you interviewed Gazan residents to find out if they have – or know someone who has – a tunnel dug underneath their house? How do they feel about this?

32. Have you tried to interview any of the parents of the 160 Palestinian children who died building the terror tunnels?

33.   Have you asked Hamas spokespersons why they are setting out to murder children by firing rockets towards civilian populations?

34.   Have you interviewed any UNRWA officials about why Hamas are storing weapons in their schools, and how the weapons got there?

35.   Are you currently investigating how Hamas rockets ended up in UNRWA schools?

36.   Are you currently investigating why UNRWA returned rockets to Hamas and their police force?

37.   When Hamas breaks a ceasefire with Israel – as it has done 6 times – how easy is it to report on this from Gaza?

38.   Is there any anti-Hamas sentiment in Gaza, and how is it expressed?

39.   Were you aware that Hamas chose to execute dozens of anti-war protesters in Gaza, and did you not consider this to be worth
reporting?

40.   Is international media reporting from Gaza free from pressure and intimidation, or is there a real problem – and if so, how will you address it?