Today marches were held in cities throughout the world condemning Israeli actions in Gaza.  As Dave Rich pointed out in a recent post on Left Foot Forward, people can be selective in their outrage.

And clearly many of those demonstrating had agendas which went far beyond wanting to save innocent lives in Gaza.  Some posters asserted that Zionists are Nazis, deaths in Gaza  a Holocaust. 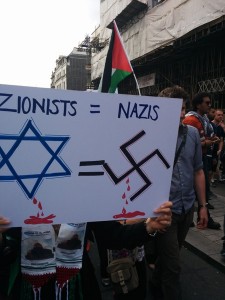 Some sought to draw parallels between Israel and ISIS. Others brandished the flag of Hezbollah. 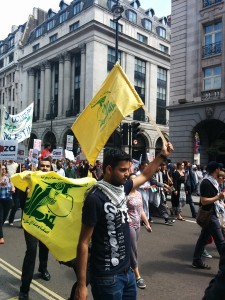 Unashamedly antisemitic materials were handed out.

Clearly not everyone who took part in one of these demonstrations should be dismissed as an anti-Semite, but the level of hostility towards Israel demonstrated by the march’s key organizers and speakers is difficult to miss or excuse. Jenny Tonge, for example, is reported to have said that Israel ‘has lost its place in the international family of nations.’  But those who really do just have sincere humanitarian concerns should not be accused of racism.

Hat Tip: Michael Ezra, with thanks for the photographs

Gene adds: if anyone doubts that this was essentially an anti-Zionist demonstration, Times of Israel reports:

Led by speakers on a podium, protesters holding placards and banners chanted pro-Palestinian and anti-Israel slogans.

At one point, a woman on the podium shouted “from the river to the sea” — a call for the elimination of Israel — and protesters responded by yelling “Palestine will be free.”