Yesterday a Molotov cocktail was hurled at a synagogue in the Parisian suburb of Aulnay sous Bois. Happily no one was hurt and little damage was caused. Tonight reports are coming in that the Don Yitzchak Abarbanel Synagogue has been attacked by rioters protesting against the actions of Israel.

Clashes erupted in Paris on Sunday as thousands of people protested against Israel and in support of terrorist groups in Gaza, where a six-day counterterror operation by Israel has left 166 dead.

Several thousand demonstrators walked calmly through the streets of Paris behind a large banner that read “Total Support for the Struggle of the Palestinian People”.

But clashes erupted at the end of the march on Bastille Square, with people throwing projectiles onto a cordon of police who responded with tear gas. The unrest was continuing early Sunday evening. 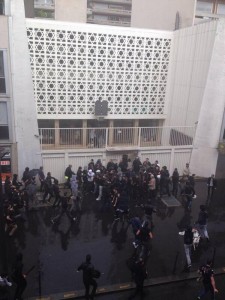 There are reports of serious injuries although so far these are not confirmed.

Edit: Andrew Coates notes that only a comparatively small minority of the protestors were involved in the attack of the synagogue, and most demonstrated peacefully.

Update: Pierre Minnaert is described as an ‘elected environmentalist’ although I am not clear what his precise role is. His initial response to the attacks on French synagogues was deplorable.

You can read a rather longer comment from him  here. Here is my translation of this (please let me know if anything needs to be corrected).

No comment. Place of worship or embassy? But of course the antisemitism of the youths in the suburbs comes from nowhere, and it’s only because people are bad that synagogues are treated like the Israeli embassy. That doesn’t excuse antisemitic comments, or attacks on people, and certainly not throwing molotov cocktails at a synagogue, but does go a large way towards explaining why a new form of antisemitism has developed in France.’

Although Minnaert does condemn the attack, the sarcasm of that ‘but of course’ and the decision to emphasise the ‘root causes’ rather than the violent attack itself are disturbing, particularly given the levels of violent antisemitism in France. Imagine if he had been talking about a threatening onslaught by a mob of white far right types against a mosque which hosted an outrageous preacher (and of course the synagogue meeting was not framed in anti-Arab or anti-Muslim terms) and had then said:

and had then gone on to say that the mosque’s conduct did not excuse violence but did explain it.

“You’d rather make you fuck a Zittoun, you prefer to make you fuck by a Jew, rather than you get help from someone who looks like you?”

The Socialist Mayor of Vaulx-en-Velin, Helen Geoffroy, seemed to brush aside the problem.

“I sent a remonstrance to Ahmed Chekhab. These remarks unacceptable. Ahmed is a young Chekhab elected under pressure. He is still learning, it takes time to learn it “

I find her response more chilling than Chekhab’s bigoted rant.